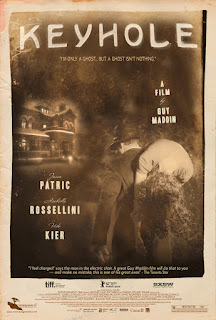 There are few other directors out there doing what Guy Maddin does. Long before The Artist swept the Oscars amid breathless praise for its supposedly unique embrace of silent-era styles, Maddin was making far better and more experimental silent films to critical acclaim and audience indifference.

While The Artist is clearly a more commercially viable work, as it was based on the most innocuous silent film tendencies, Maddin's films reflect the more avant-garde aspects of the medium. They are an extension of the work of filmmakers like Luis Bunuel (Un chien andalou), Germaine Dulac (The Seashell and the Clergyman), Man Ray (Emak-Bakia), and other early surrealist and dadaist filmmakers who challenged the medium of film, pushing it to its boundaries and beyond. Like the surrealists, Maddin's films follow a kind of dream logic, as if the audience is somehow trapped inside the characters' subconscious, their darkest secrets and sexual fantasies tumbling to the forefront.

While his latest film, Keyhole, may not be silent, it certainly adheres to his trademark silent era style. In fact, its lack of silence is perhaps its greatest drawback. It's not that Maddin is on completely unfamiliar territory, but sound seems almost out of place here, not to mention the often grating narration by the naked ghost of an old man chained to a bed, who serves as our guide. That ghost is the lingering spirit of the father of Hyacinth Pick (Isabella Rossellini) who has locked herself in a room in the center of her house surrounded by memories and spirits. Her husband, Ulysses (Jason Patric), is a gangster who has stormed the house in order  to reach his cloistered wife.

He is accompanied by his right hand man, the boy who killed his son before being adopted by Ulysses to take his place, a girl who seems trapped between the real world and the spirit world (Brooke Palsson), and a hostage, his youngest son, Manners (David Wontner), whom he no longer remembers. As he attempts to reach his wife, he encounters the spirits of the past trapped within the walls of his home, some vengeful, others benign. Along the way, all of them will make discoveries about themselves as they become increasingly lost in their own phantasmagorical world of shadows and desires.

Creating a plot summary of a Guy Maddin film is basically an exercise in futility, and one that is ultimately beside the point. I use the term "plot" loosely because Maddin isn't interested in telling a story so much as he is exploring the subconscious. His characters' psychosexual issues and repressed desires make up most of the action rather than any kind of superfluous story. What he has done instead is peer through the keyhole of their minds, past the barriers we create around ourselves, into the darkest recesses of our subconscious mind. Hyacinth is a character consumed by grief and has walled herself off from the world. Her husband is trying to reach her by any means necessary, but first he must tackle his own demons in order to get through to her.

The original surrealists purposely resisted any kind of interpretation, so referring to Maddin simply as a surrealist isn't completely accurate. While he does create the feeling of being inside a dream, which is one of the key tenets of surrealism, Maddin does not adhere to any kind of aesthetic dogma. He is in a class by himself. Keyhole may not represent his very best work, but it is certainly fascinating to explore and contemplate. It is a richly layered ghostly funhouse that, while not as profound or as powerfully rendered as his masterpieces The Heart of the World and Cowards Bend the Knee, is a singularly bizarre experience all its own. Maddin continually pushes the boundaries of cinema in consistently striking directions, and in the case of Keyhole, he has created something as disturbing as it is hilarious, as serious as it is absurd, showing us what so few filmmakers ever really do - something we have truly never seen before.