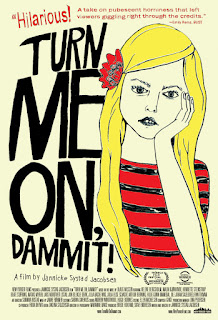 If the recent controversial comments by Rush Limbaugh about Sandra Fluke have taught us anything, it is that all a young woman has to do is publicly state her need for birth control in order to be labeled a slut.

That double standard has long existed inside Hollywood and out. In fact it wasn't that long ago that the female orgasm itself was thought to be a myth. Women's sexual enjoyment has always been more of a taboo than their male counterparts, and the fact that women like sex just as much as men, and are just as prone to sexual fantasies, is often ignored in movies. Now, Jannicke Systad Jacobsen Norwegian coming of age comedy, Turn Me On, Dammit! seeks to change all that.

Set in the tiny Norwegian town of Skoddeheimen, Turn Me On, Dammit! is the story of Alma (Helene Bergsholm), a 15 year old girl who just wants to have sex. When she's not fantasizing about just about everyone she comes in contact with, she's either having phone sex or masturbating in her room. The usual object of her fantasies is Artur (Matias Myren) a local boy she often spends the afternoons with. One day a local party, Artur approaches Alma, pulls his penis out of his pants, and presses it against her thigh. Thrilled and intrigued, Alma immediately confides in her best friend, Ingrid (Beate Støfring). Unbeknownst to Alma, Ingrid also has a crush on Artur, and is incredulous about Alma's claims. When Artur denies it, Ingrid turns against Alma and proceeds to tell the entire school that Alma is some kind of pervert.

Soon, Alma finds herself an outcast in her own town. And in a town as small as Skoddenheimen, everyone soon finds out about Alma's "abnormality." The kids at school start calling her "Dick Alma," Artur begins ignoring her existence, even her own mother thinks there's something wrong with her. All the while her sexual curiosity only grows, so does her frustration, with no one to tell her that what she is feeling is perfectly normal.

Jacobson clearly has a very keen understanding of teenage sexuality. While Turn Me On, Dammit! is clearly a comedy, its characters remain disarmingly, even painfully honest. There's Alma, the sexually curious one, Ingrid, the young queen bee, and Sara, the wannabe political activist who believes she can right all the world's wrongs by raising awareness and writing letters. Jacobson draws them all with both sensitivity and intelligence, getting down to the very essence of a young girl whose raging hormones are pushing her into territory she is not fully ready to explore. The entire film, however, seems to exude the same kind of reaction the public at large seems to have to a sexually liberated woman. Even Alma sees her sexual exploration as "misbehaving," when most of what she does is merely healthy exploration. Jacobson wants to hammer home the point that Alma has nothing to be ashamed of, even as the world around her seems unready and unwilling to embrace a girl exploring her sexuality, while the male instigator faces little to no ridicule.

The young cast of mostly non-professional actors are refreshingly real, untouched by the typical looks and attitudes of the stereotypical Hollywood  teenager. They fully commit themselves to tricky and potentially awkward territory with great aplomb, and the result is something wholly unique. Turn Me On, Dammit! is a comedy about real teenagers, not manufactured Calvin Klein models with fairy tale endings. It's a brash, insightful, and poignant film with a daring new perspective. As this strange national debate about birth control  as a sign of promiscuity rages on in America, Turn Me On, Dammit! has the chutzpah to present a young girl with an unabashed desire for sexual gratification without judging her, even treating her as perfectly normal - because that is exactly what she is. No matter what America's strange tradition of prudishness would have us believe, sex is nothing to be ashamed of, and Jacobson's altogether wonderful new film is a warm, witty, and hilarious celebration of healthy sexual desire in all its forms. It's one of the best coming of age comedies in years.