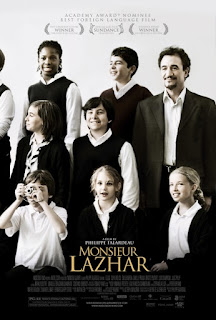 The "inspirational teacher" film has become one of those tired cliches that I suspect most of us are tired of seeing. From Dead Poets Society, to Mona Lisa Smile, to The Great Debaters, to The Emperor's Club, the idea has been done so much and the territory covered so often, that there seems to be very little left to bring to the table.

The genre has yielded some strong films of course. Goodbye, Mr. Chips is a classic. Dead Poets Society isn't bad, Mr. Holland's Opus is near great, and The Prime of Miss Jean Brodie is arguably the greatest (and darkest) of them all. But the very mention of another "inspirational teacher" drama is enough to illicit rolled eyes and groans of "here we go again."

That is perhaps why some predicted that Philippe Falardeau's Monsieur Lazhar would triumph over frontrunner (and eventual winner) A Separation for this past year's Best Foreign Language Film Oscar sight unseen. After all, any film dealing with teachers must be the kind of easily digestible schmaltz that the Oscar foreign language committee usually falls all over themselves for, right?

Not necessarily. While Monsieur Lazhar may teeter dangerously close to sentimentality at times, Falardeau handily pulls it back, steadying the emotional ballast of this tricky and at times difficult film. It's certainly a much darker and serious minded take on a well worn forumla, dealing with much deeper and more painful issues than films of its type usually do. The teacher in question is Bashir Lazhar (Fellag), an Algerian refugee who has fled to Canada to escape his troubled past. He seeks a job at an elementary school, and is taken on as an emergency replacement for a teacher who committed suicide by hanging herself in the classroom. This shocking and ultimately selfish act immediately sets Monsieur Lazhar apart from its thematic brethren - this is serious stuff, and it addresses its issues with a quiet sense of wisdom and maturity.

The suicide rocks the school, of course, but it affects her students most severely, and Lazhar finds his work cut out for him. In his attempts to reach the students, he begins to understand the true depths of their pain and the roots of his predecessor's depression. As he peels back the layers of their emotions, he exposes a raw nerve at the heart of the problem that has yet to heal, and even as his own past begins to catch up with him, he becomes the strong role model these students need to begin the slow but ultimately cathartic path to healing.

Falardeu wisely chooses not to oversimplify the wounds of these children, and that's part of what makes Monsieur Lazhar so special. Falardeau isn't interested in playing psychiatrist or applying simplistic answers to complex problems. By the time the credits roll there are still questions left unanswered, still problems left unsolved. But these kids have found an advocate for life who will leave a lasting impact perhaps even greater than the trauma inflicted upon them by their previous teacher. It is somewhat refreshing that Lazhar himself is no saint. He has an old school style (which leads him at one point to smack an petulant student across the head), and a haunted past, but he cares about these kids even as they are in danger of becoming lost in an uncaring system that doesn't know how to address their inner turmoil.

The film hinges on the performances of the children, which can often spell trouble for films of this type. But they are universally remarkable, especially Émilien Néron as the troubled Simon, whose connection to his previous teacher ran deeper than anyone imagined, and Sophie Nélisse as the precocious Alice, who has a fine career ahead of her. Much like their performances, Falardeu handles their plight with maturity and sensitivity, walking a fine line between schmaltz and restraint. More often than not, he hits just the right note, gracefully balancing some very complicated emotional waters without overstatement or easy placation. Monsieur Lazhar cuts right to the heart of what a great teacher really is, not just preparing children to take tests but truly educating, helping them to grow both emotionally and academically. In that regard, it is a timely film indeed, a quietly moving paean to education that pulls no punches in its portrayal of childhood trauma and resilience in the face of darkness.