By now you've probably heard about the controversy surrounding spoilers in reviews of Cabin in the Woods. It is, of course, like most controversies on the internet, much ado about nothing.


There are few groups more prone to getting their panties in a twist than movie geeks and bloggers (two groups which are often one and the same). The controversy first started with reviews by Esquire's Nick Pinkerton and the New York Observer's Rex Reed that seemingly lay bare the entire plot. You would think the fact that Pinkerton prefaces this discussion with "This is where, according to the degraded discourse of the twenty-first century, I'd normally be obliged to mar this paragraph with the all-caps SPOILER ALERT — but, well, forget it" would have been a clue to those wishing to go into the film blind, but this is a controversy characterized by righteous indignation. Not, you know, logic.

If people wanted to get outraged over something, why not the fact that Reed's review clearly reveals that either he didn't even see the film, walked out of it, or just didn't pay attention. His accusation that the trap the characters find themselves in is some kind of video game is so far off the mark it's laughable. But the fact remains that what these people are complaining about being revealed is, well, the plot itself. 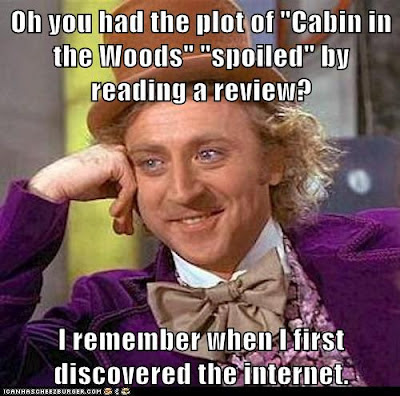 It's pretty much impossible to discuss The Cabin in the Woods in a critical manner without discussing the plot in detail to explore its allegorical meaning. Any critic that doesn't at least touch on that is pretty much derelict in their duty as a critic. What's more is that there really is no big twist. I knew just from watching the trailer that the entire thing was a setup, and all of that is revealed in the opening scene of the movie. The pleasure is in the journey. It's the little things along the way that make Cabin in the Woods so much fun. The problem is with people being way too uptight about spoilers, when if they wanted to go into the film completely blind they shouldn't have been reading reviews or online discussions about it in the first place.

Therein lies the rub. If I don't want to know who went home on RuPaul's Drag Race last night, I avoid Twitter and Facebook until I have a chance to watch it. Simple. If I accidentally see something, it's my own fault. The same applies for movies. If you don't want to know anything about it, don't read the reviews or visit online forums that may be discussing it until after you've seen it.

Of course, there is such a thing as common courtesy. I'm not going to post something like HEY GUYS MALCOLM WAS THE DEAD PEOPLE HALEY JOEL OSMENT SAW because that pretty much negates the entire viewing experience, and is kind of a dick move. Knowing that the cabin in The Cabin in the Woods is run by a corporation setting the five kids up for sacrifice to ancient gods does not negate the viewing experience. It's what the movie is about. In fact it's pretty up front about its intentions from the get-go. Which is why I say is that the twist is that there is no twist. The people whining about spoilers are the kind of people who want to go into movies knowing nothing about them, which in today's culture of complete media saturation is all but impossible. 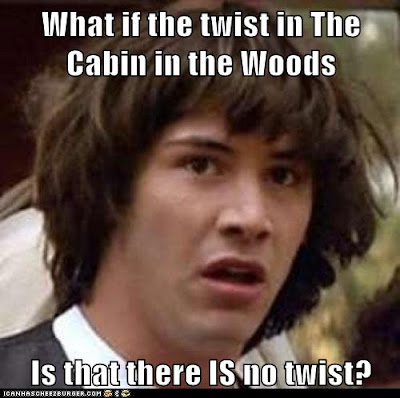 Yesterday, I posted this brief review of the film on MUBI:


Exceedingly clever meta-horror film lovingly sends up the genre while simultaneously indicting the audience as 5 stereotypical college kids head out into the woods, only to end up in a cabin controlled by an organization dedicated to making bloody sacrifices to ancient gods. Brilliantly conceived, THE CABIN IN THE WOODS is the most wildly inventive and entertaining horror film since the original "Scream."

Naturally, the very first comment was "ummm... SPOILERS!!" No, those aren't spoilers. That's a plot summary. Knowing that before going into the theater doesn't change the viewing experience at all. I'm just sick of people like that whining about spoilers. I'm sick of the very term. If you don't want to know anything about the movie before seeing it, just stay off the internet and let me discuss the film in appropriate channels on my own terms. I shouldn't have to tiptoe around those who haven't seen it in a place where the film is being discussed by those who have. Stop whining, buy a ticket, and come back when you've seen the film. The world will be a happier place.
Email Post