Win a Copy of "Tyrannosaur!" 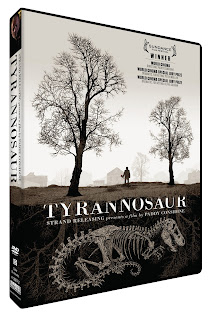 All you have to do is head over to my Twitter page and retweet this message. Five winners will be chosen and announced on April 2nd. Winners must be residents of the United States to be eligible.

Here is the official synopsis of the film:

Tyrannosaur follows the story of two lonely, damaged people brought together by circumstance. Joseph (Peter Mullan) is an unemployed widower, drinker, and a man crippled by his own volatile temperament and furious anger. Hannah (Olivia Colman) is a Christian worker at a charity shop, a respectable woman who appears wholesome and happy. When the pair is brought together, Hannah appears as Joseph’s potential savior, someone who can temper his fury and offer him warmth, kindness and acceptance. As their story develops, Hannah’s own secrets are revealed — her relationship with husband James (Eddie Marsan) is violent and abusive — and as events spiral out of control, Joseph becomes her source of succor and comfort.

Special features include a commentary by director Paddy Considine, Dog Together, Considine's short film that inspired Tyrannosaur, deleted scenes, and more. The DVD will be released on April 3rd from Strand Releasing.
Email Post