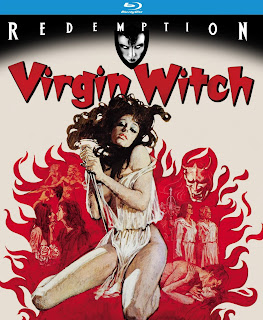 Whereas Rollin was best known for vampire erotica, Virgin Witch (1972) and Killer's Moon (1978) are a bit of a change of pace, although both represent very different types of horror exploitation.

Even the plot synopsis reeks of exploitation. Two young women are tricked by a lesbian witch into coming out to an isolated country estate under the pretense of being nude models for a very special client. Instead, they are to be sacrifices for a secret witches coven. The plan goes awry, however, when one of the girls is revealed to have greater supernatural powers than even the high priestess, and the tables are completely turned. Yes it's trash, and most of the film exists solely as an excuse to get naked girls on screen and push the boundaries of relaxed British censorship standards, but it's actually pretty visual inventive. Kino's high-def transfer is the best of any of their Redemption titles so far, with the vibrant, contrasting red and greens almost popping off the screen. It's a shame the movie isn't better, but it's not surprising that the disc is completely devoid of special features outside of a requisite trailer and a photo gallery. 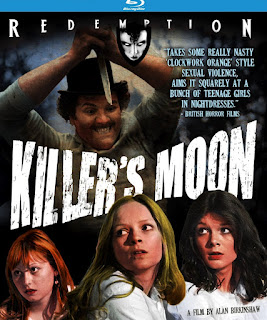 Faring a little better is Alan Birkinshaw's Killer's Moon, which despite coming off like a low rent slasher knock off, is actually pretty good. Sure the painted backdrops are a bit obvious and the acting at times wooden, but coming out around the same time as John Carpenter's iconic Halloween, Killer's Moon is surprisingly effective.

The plot is pretty much standard slasher fare - a young womens' chorus becomes stranded at an old estate out in the woods, where four escaped asylum inmates are on the loose. The four psychopaths are under an experimental treatment that has led them to believe that they are in a dream, completely destroying their inhibitions as they slash their way through everything they encounter. It's actually an interesting early twist on a burgeoning new genre (Friday the 13th and others had not yet been released) that works well despite its exploitation roots.

Whereas Virgin Witch focused on sexuality and nudity, Killer's Moon actually feels as if its trying to be a good film, and most surprisingly of all, trying to scare the audience. Birkinshaw succeeds in delivering a palpable atmosphere, as well as a few (intentional) laughs. While it may not look as good as Virgin Witch, what it lacks in production values it makes up for in earnestness. It's clear that the filmmakers believed in what they were making, and it shows. This isn't just something that was thrown together for a quick buck - Birkinshaw wanted to make something worthwhile, and not only does that set him apart from most of his exploitation brethren, he actually succeeds in doing so.

The blu-ray disc also includes some illuminating interviews with director Alan Birkinshaw and actress Joanne Good, as well as an audio commentary, making it not only a better film than Virgin Witch but a more thorough disc presentation as well. It's clear why Kino spent more time on Killer's Moon - it's an obviously better film, although I would have liked to have seen a little more historical background on Virgin Witch. Still, to fans of Redemption and of exploitation horror, both films are gems that deserve their day in the sun, or in the darkness, whatever the case may be.