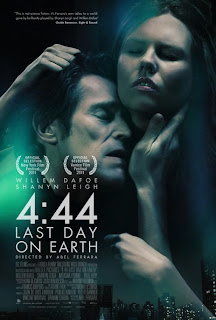 The end is near.

That much is clear right from the beginning of Abel Ferrara's new film, 4:44 Last Day on Earth. The powers that be have not heeded the warnings of scientists, whose predictions of certain doom if the effects of global warming are not reversed have now come true. At 4:44 AM, give or take a few seconds, the world will end.

Some panic and take to the streets. Other gather at the Vatican to spend their last moments in prayer. Others commit suicide, unable to take the tension and uncertainty of Earth's final hours. The citizens of New York, however, soldier on. There is the occasional suicide, but as in the wake of 9/11, New Yorkers band together to face the end, spending their last moments with family and friends, saying goodbye to life as they know it.

In the case of Cisco (Willem Dafoe) and Skye (Shanyn Leigh), they have chosen to face death just as they have lived their life - together in their apartment, continuing life as usual.

Skye paints and listens to Buddhist philosophy. Cisco talks to friends and relatives on Skype and orders Chinese food, often musing to himself about the almost absurd predicament in which the world finds itself. They do their best to continue on as before, even in the face of death. Ferrara keeps the action focused on this one apartment, living out the end of the world through the final hours of one couple. Anything we see of the outside world, the riots, the vigils, are seen through the television. It is a self-contained apocalypse, the exact opposite of the lavish, CG visions of Armageddon of Roland Emmerich and Michael Bay. It's a strong concept, an intimate take on a global disaster. Ferrara attempts to make the universal personal, but he only half succeeds.

It is never revealed how anyone knows that the world will end at 4:44, nor how scientists were able to pinpoint such a specific time. But the details aren't as important as the relationship between the two main characters, which remains woefully underdeveloped. Skye has two modes; crazy and crazier, occasionally taking a break from painting to have a breakdown before returning to her work. Cisco wanders around talking to himself like a schizophrenic, mumbling random thoughts and philosophies that are frequently indecipherable. For a film that asks us to spend an hour and a half with these two characters alone in an apartment for the end of the world, it keeps us frustratingly at arm's length.

4:44 actually succeeds in creating a palpable atmosphere of impending doom near the beginning. The juxtaposition of news commentary and scenes of global panic offer glimpses into the world outside the apartment walls, but the film loses that quality about midway through and replaces it with a meandering sense of ennui. While it was clearly Ferrrara's intention, it doesn't exactly make for riveting viewing. It feels like a film without an identity, an interesting concept that never got out of development. There is certainly potential there for a powerful character study, wherein facing mortality forces the characters to face their true selves. But the script lacks tension, and honestly Dafoe and Leigh lack chemistry, even in their awkwardly prolonged sex scene at the beginning.

It's a shame because the film is rife with promise. It's build around a solid, relevant idea that plays off audience expectations and our national fascination with the end of times. Unfortunately it just doesn't add up to a satisfying whole. It remains frustratingly inert, every bit as trapped in its own lack of directions as its characters are within their four walls. It's attempts at philosophizing fall flat, and are more muddled and opaque that profound and revelatory. There is a lot of territory to be covered in the end of the world, lots of emotional layers to be explored and and examined. 4:44 doesn't do that. It coasts along on an undercooked idea that never gets off the ground. It's hard to imagine the real end of the world being this dull.