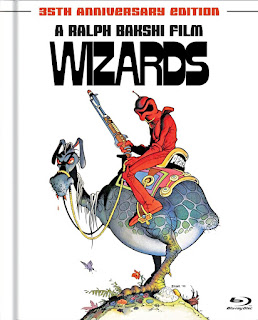 The first animated film made by 20th Century Fox, Wizards was made concurrently with Fox's other 1977 sci-fi epic, Star Wars, and even changed its name at the request of George Lucas from War Wizards to simply Wizards in order to avoid any potential confusion.

While it's hard to imagine anyone confusing the two films now, the parallels between the two projects are certainly there (and not just because both have Mark Hamill).

Before he made Wizards, Bakshi became famous (infamous?) for directing Fritz the Cat, which became the first animated film to ever be slapped with an X rating from the MPAA. Coming after Fritz, Wizards was something of a change of pace for Bakshi, while still retaining that same revolutionary spirit. On the one hand, it is an old fashioned tale of good and evil in a land populated by elves and fairies, on the other hand it is a dark allegory for the destructive nature of technology and the rise of Nazism. 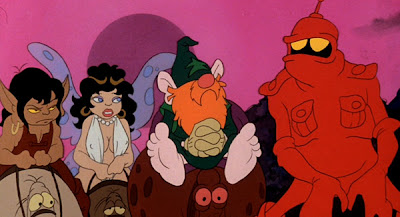 The result is a strange hybrid of childlike and grownup sensibilities. The story, set on post-apocalyptic Earth millions of years after it was obliterated in a nuclear holocaust, centers around two brothers, both wizards, one good and one evil. Avatar is the good brother, who rules over the good peoples of Montagar, while his evil brother, Blackwolf, rules over Scortch, a dark world made from the twisted ruins of human civilization. For thousands of years the two brothers have coexisted, with Blackwolf occasionally invading Montagar to no avail. But when Blackwolf discovers ancient footage of Adolf Hitler and his fearsome war machine, he decides to take up Hitler's mantle and enact a new final solution on the people of Montagar, using the footage of Hitler to strike fear in the hearts of the opposing armies. 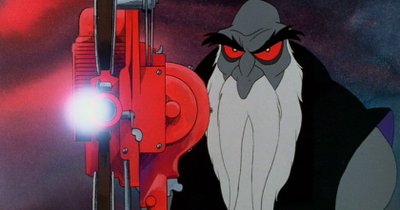 It's clear from the film's anti-technology themes (one character refers to it as a "perversion") that the film is very much rooted in the counterculture ideology of the 1960s (nature = good, technology = bad). And indeed the animation style has an almost psychedelic quality. Even though it was released in 1977, the film feels like something of a relic, an almost dogmatic political allegory that often feels uncomfortably simplistic, even for a children's film. The unrelenting Nazi imagery is also surprising (Blackwolf adopts the swastika as his personal symbol, and a mutant devours a pig marked with a Jewish Star of David), as are the hyper-sexualized fairies. The heroic Avatar is portrayed as something of a lech, a lewd old man with a much younger, scantily clad lover. It's all part of the almost schizophrenic nature of the film. Bakshi clearly had a unique vision, using animation over live action footage to create an unsettling visual effect for Blackwolf's dark armies, but the incongruity between the adult themes shoehorned into a children's fable is awkward at best, downright uncomfortable at worst. The wholly inappropriate, jazzy score is also a problem, pulling the audience out of the film with the dated wailing of its saxophones.

Still though, if Wizards is a failure, then it's a fascinating failure. The story may have been better served by a different director with a less conflicted vision, who could better balance its themes into something more universal. But Fox clearly believes in this film, judging by the surprisingly first class blu-ray release. It may have been (rightfully) overshadowed by Star Wars upon its initial release, but its fantastical tale of good versus evil seems very familiar, and the similarities are made even more striking by the proximity of their release. There is a reason, however, why Star Wars is remembered and Wizards remains something of a peculiar artifact - one is a great and timeless film, while the other remains frustratingly trapped in its own time.