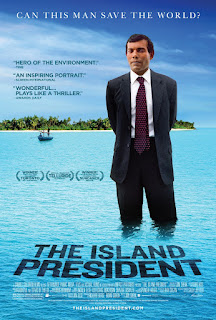 We've all heard the arguments over global warming (now typically referred to by the less politically charged moniker - climate change). We've marveled at how such seemingly innocuous, no-brainer issues such as this get turned into hot button partisan issues because one political party can't possibly be seen agreeing with something the other party believes in. But what we haven't seen is the true face of global warming.

No, it's not Al Gore. And as good as An Inconvenient Truth is, I can't help but wonder if that Oscar winning film hasn't done more harm than good in the long run. After it was released, climate change became a partisan issue more than ever before, because the science of global warming is now forever identified with a Democratic politician. And of course, if you're a Republican politician, anything put forth by a Democratic politician must be suspect, if not outright fabrication, and vice versa. It's a never ending, vicious cycle of partisan sniping that perhaps the key issue of our time has now become ensnared in, and with both sides digging in their heels and refusing to listen, it doesn't look like anything is going to change anytime soon. 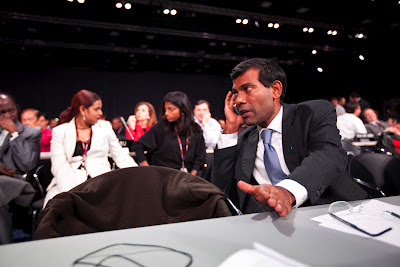 Enter Mohamed Nasheed, president of the Maldives, an island nation in the Indian Ocean whose very existence is threatened by the rising sea levels. A political crusader who was recently elected to his first term as president after the Maldives' first democratic elections ousted dictator Maumoon Abdul Gayoom, Nasheed is a natural fighter whose only concern is fighting for his people. The greatest threat to his nation isn't a hostile enemy, or economic ruin, or a faltering infrastructure, it's global warming. As the sea levels rise due to melting glaciers, the Maldives, which is made up of over 2,000 tiny islands, is slowly disappearing, with the Indian Ocean threatening to swallow whole islands, and eventually, the entire country.

Nasheed doesn't know how not to fight, and he has plead his case many times to his neighbors, especially India, who doesn't understand how its their problem if its not their emissions doing the harm. So it's up to Nasheed to plead has case on the world stage, to both the United Nations and an international climate change summit it Copenhagen, where his greatest opposition comes from China, the world's leading producer of carbon emissions. Armed with alarming statistics that show if carbon emissions are not reduced to a certain number, the Maldives will be swallowed by the sea, Nasheed sets about to change the hearts and minds of the world's great economies. There can be no compromises, because anything less means certain destruction for his nation. But the politics of climate change aren't so simple, and as Nasheed fights to get his message heard, even pledging to become the world's first carbon neutral country, the desires of far wealthier nations threaten to overshadow the needs of a tiny island nation whose very existence hangs in the balance. 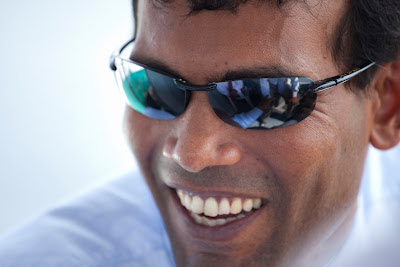 Whereas An Inconvenient Truth focused on the scientific evidence supporting the existence of global warming, The Island President looks beyond the science to examine its immediate effects in a very urgent and personal way. In many ways, that makes The Island President a more compelling film, because it puts a human face on a very contentious issue that is often clouded by partisan rhetoric. Nasheed's crusade is both inspiring and heartbreaking, a noble cry for help in the face of massive global indifference. The film itself puts aside politics and lays bare the cold, hard facts - the Maldives, not only a sovereign nation but an exotic playground for the rich and famous, are in real danger, and its people soon to be refugees from a modern day Atlantis. Director John Shenk (Lost Boys of Sudan) asks simply - if something, anything can be done to help these people, what's the harm in trying?

That is, perhaps, the greatest sticking point in the global warming debate. Whether it is caused by humans or not, how can it hurt to try to reverse such a clearly harmful trend? If it can be reversed, isn't it out duty to ensure the survival of our planet for future generations? That is exactly what President Nasheed is doing, and The Island President celebrates him as the hero that he is. His unique insight makes the political, personal, and the indifference of the first world more egregious than ever. It is a smart and engaging portrait of a man for whom this issue hits closer to home than anyone, illustrating a tremendous issue that is now too big, and no longer able, to be ignored.