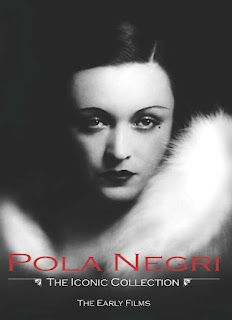 The name Pola Negri may not ring many bells with a lot of cinephiles, much less anyone in the general public. But while she may not exactly be a household name, Negri is nonetheless a legend of the silver screen.

As the marketing materials proclaim - "Before Garbo or Dietrich, there was Pola Negri." And indeed, Negri could stake a claim as the original femme fatale. While her earliest screen credit was 1914's Slave of Passion, Slave of Vice, the new three disc set put out by Bright Shining City Productions collects four of her earliest works, beginning with 1917's The Polish Dancer.

Directed by Aleksander Hertz, The Polish Dancer is the oldest surviving film from Poland, and it's lucky to exist at all. While it may have been restored, it's clear that the negative was in bad shape, with some sequences nearly beyond repair.
The film itself isn't anything remarkable, it's a relatively standard melodrama about a wild young woman who runs away from her shamed parents and becomes the object of affection to a married man, that neither breaks any ground nor pushed the medium in any revolutionary direction. What makes it significant isn't so much its style or content - but its place in history as the oldest Polish film. There's nothing particularly unique about it to set it apart, it was clearly influenced by Hollywood melodramas of the same period, but its place in history makes it a film worthy of consideration.

It is the second film in the collection, however, that is the true gem of the set. 1918's The Yellow Ticket, which was given a more famous remake in 1931, stands out from the other three films as an important early work. Directed by Victor Janson and Eugen Illés, The Yellow Ticket stars Negri as a young Jewish woman who moves to Russia and faces great prejudice as she attempts to earn a degree. One of the first films to deal directly with antisemitism in Czarist Russia, the film also features extensive use of flashback, which was almost unheard of in 1918. Film historians tend to credit D.W. Griffith with the earliest uses of flashbacks in film, but information remains sparse until the 1930s. Their use in The Yellow Ticket indicate an aesthetic experimentalism that really puts it a cut above the rest.

The same cannot be said of 1918's Eyes of the Mummy Ma, which is surprising since it was directed by renowned director Ernst Lubitsch. One of Lubitsch's early works, it's clear this was made a long time before he had developed his signature "Lubitsch touch" later seen in such films as The Love Parade and The Shop Around the Corner. Not quite the horror film that its title implies, Eyes of the Mummy Ma is the story of a young woman held captive in a mummy's tomb, who after being rescued by an enterprising young artist, ascends through society while being relentlessly pursued by her captor (played by a hammy Emil Jannings, who would go on to be the first Oscar winner for Best Actor a decade later). While not quite in as bad a shape as The Polish Dancer, there was clearly a lot of damage to the negative over the years, resulting in a washed out image that is often difficult to discern, especially in the over-lit desert sequences.

Faring a bit better is 1921's Sappho, directed by Dimitri Buchowetski, which finds Negri right at home as a femme fatale whose beauty drives men to madness. Pursued by both the brother of a man who was committed to an asylum out of his love for her, and her employer who pays her in exchange for sexual favors, Negri is faced with nearly impossible choices, trapped by her own secrets. Originally released in censored form, the version presented here is from an uncut negative from the MGM vaults. Of all the films presented in this set, Sappho perhaps most strongly demonstrates Negri's smoldering sexuality. From those trademark piercing eyes with their pitch black eye shadow to her fluid, sensual movements, Negri was clearly a born star, and the camera loved her. Her films may not be masterpieces, but they provide a fascinating look at one of the very first movie stars at the height of her powers. Now, thanks to Bright Shining City, Pola Negri lives on for new generations to discover. While not really for casual movie-watchers, this Iconic Collection will provide cinephiles a unique opportunity to discover one of cinema's earliest, and often overlooked, legends.