Blu-ray Review | "World on a Wire" 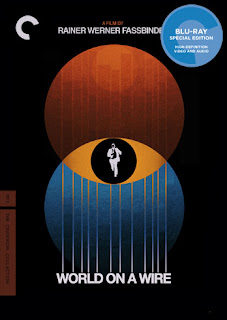 Rainer Werner Fassbinder's 1973 film, World on a Wire may have been made for West German television, but make no mistake, this is no typical made for TV film.

While the film may have that certain washed out, slightly bluish look one has come to expect from television shows from the era, but the HD transfer by the Criterion Collection is surprisingly sharp.

World on a Wire may be one of the more obscure efforts in Fassbinder's career, but its inclusion in the collection isn't without reason. Fassbinder, who is probably most famous for Ali: Fear Eats the Soul, which was released the following year, was perhaps one of the greatest post-war German filmmakers. before his career was cut short by his death from an overdose of cocaine in 1982 at the age of 37. His work on World on a Wire is something quite extraordinary, especially when held against the effects-laden sci-fi epics of today. This is science fiction at its very best, distilling the genre down to its essence and emerging with something both thoughtful and thrilling.

Originally shown in 2 parts, the three and a half hour film is based on the novel "Simulacron-3" by Daniel F. Galouye, but it plays out like something by Philip K. Dick, whose work has inspired films such as Blade Runner and Minority Report. The central conceit focuses on a group of scientists who have created a virtual world in a computer, a "world on a wire," populated with virtual citizens who think and act like humans, without realizing that they are actually just a series of ones and zeroes. The creation of this world raises a series of ethical questions, as the scientists travel into it to observe their work, with the assistance of one "liason," who actually understands who and what he is.

When the co-creator of the world dies under mysterious circumstances, his partner, Fred Stiller (Klaus Löwitsch), becomes determined to find out why. People around him begin to disappear without a trace, even those who once knew them seem to have no memory of their existence. As he gets deeper into the mystery, however, he begins to uncover disturbing truths that rock his world to its core, and he begins to suspect that the world he knows as real may not be so real after all.

It's interesting having the release of World on a Wire coming so closely behind Criterion's blu-ray release of Chris Marker's La Jetée, which is a clear spiritual predecessor to this film. From the image of a man hooked up to wires to its themes of mental transportation into other worlds or places, the films share unmistakable common threads. While World on a Wire may not have the same kind of emotional depth as La Jetée, it is nevertheless a quintessential sci-fi tale. Part of what makes it so remarkable is that it doesn't have any special effects. The characters transition from one world to the other with only sound to signal the journey. There are no flashy transitions or anything that distinguishes the "fake" world from the "real" world. Instead, Fassbinder relies on solid storytelling and suspense. This is science-fiction that doesn't feel like science fiction. But I'm almost surprised that this hasn't been singled out for a Hollywood remake. It seems to have all the story elements of a big Hollywood blockbuster without being a big Hollywood blockbuster. But Fassbinder one-ups Hollywood and nearly every turn. He managed to make one of the greatest science fiction films of all time, and yet hardly anyone has ever heard of it.

Hopefully that will change with Criterion's typically stellar new blu-ray, and the transfer (supervised by the great cinematographer Michael Ballhaus) is surprisingly strong, given the film's television roots. In fact the film seems to transcend its television roots at every turn. Maybe its the strong story, maybe it's Fassbinder's tightly controlled direction, but most likely it's a mixture of both. World on a Wire is a sci-fi thriller for the ages. And now, thanks to the Criterion Collection, it can be seen by a wider audience than ever before.

World on a Wire is now available on blu-ray and DVD from the Criterion Collection.
Email Post