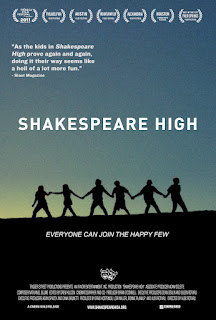 Alex Rotaru's new documentary, Shakespeare High, could not have been released at a better time. As the election year heats up, especially with the economy in the forefront (when we aren't being distracted by contraception), debates over budget cuts are always very heated. With schools feeling the crunch, one of the first things to go always seem to be the arts.

Not so at a group of high schools in California, that compete in an annual Shakespeare competition, staging scenes from some of the Bard's most famous works in a showcase of some of the region's strongest talent.

Shakespeare High has all the ingredients of other such docs as Spellbound and Mad Hot Ballroom, in which kids go toe to toe in various competitions. But there is something else at work here as well - something more illuminating and more urgent. This is absolutely essential stuff that simply cannot be ignored.

From wealthy private schools to poor rural ones, these kids come from all over from all walks of life. One school has such famous alumni as Kevin Spacey and Val Kilmer, others have never turned out anyone you've ever heard of. But after seeing Shakespeare High you won't soon forget these faces. The film bears witness to former gang members, kids whose families were murdered,  former bullies, and kids from low income families band together to create something extraordinary. Theater saved these kids, literally, and Shakespeare High bears witness to the power of the arts. That's what sets it apart from other films of its type. It's not just showing us a charming or unusual event we've never heard of, it's promoting something fundamental.

As school arts programs get cut, so too do these kids' opportunities. Theater provides an outlet, a sense of community, teamwork, and responsibility just like sports. But sports aren't for everyone, and while schools focus all their energy on sports, thousands of students go overlooked If we truly want to leave no child behind, then we shouldn't be cutting school art programs. That is the vital lifeblood coursing through this film. And while Rotaru thankfully doesn't treat it as a piece of activism, its very existence certainly is. It is an educational piece that is compelling, funny, and moving. There's no finger pointing, guilt tripping, or cries for help. But one can't help but come away from it with the sense that we can't let this get away from us. What theater has done for these students is something that can't be lost. The need for the arts in schools as never been greater, and Shakespeare High reminds us all just how high the stakes are.