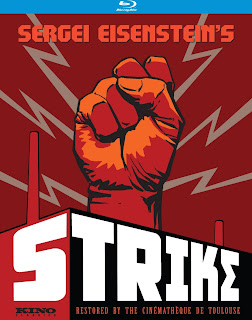 Released in 1925, right before his masterpiece, Battleship Potemkin made its debut, Strike is a fevered and impassioned tale of a group of factory workers revolting against their oppressive bosses. Set off by the suicide of a worker falsely accused of stealing who can't bear being labeled a thief, the workers take over the factory, and make a series of demands of their employers - including an eight hour workday (six for minors), a 30% wage increase, and fair treatment by their managers.

Eisenstein tends to paint in broad stokes (he was, after all, a propagandist), with almost cartoonishly evil Capitalist bosses as his villains, who callously toss aside the workers' demands while laughing over cigars and brandy in a smoke filled room. Strike, perhaps more so than any of Eisenstein's other work, relies heavily on eccentric performances to accentuate the grotesque nature of its antagonists. It is, perhaps, an even less subtle form of Eisenstein's usual brand of agitprop, but that doesn't mean it's any less effective (and it's not quite as goofy as his shamelessly grand 1938 Stalin commissioned epic, Alexander Nevsky). The factory owners try every trick in the book in order to end the strike, including planting troublemakers in their midst to goad them to violence (one wonders if Wisconsin's governor, Scott Walker, took cues from this film in dealing with the unions in his state).

The conflict continues to escalate before the police are finally called in, leading to a massacre of the workers that stands as one of the finest sequences Eisenstein ever directed. Intercut with symbolic images of a bull being slaughtered (a technique of drawing parallels between two unrelated images through editing pioneered by Eisenstein's contemporary, Lev Kuleshov, for whom it was named), the final massacre is a wrenching cinematic set-piece, ending the film with a simple yet powerful admonishment by Eisenstein - "Proletarians...remember." 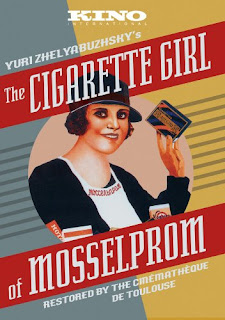 It's easy to see why his films were so effective rallying tools. Eisenstein's devotion to Soviet Montage, the idea that editing was the chief tool in a filmmaker's arsenal with which to tell a story through suggestion and rhythm, is clear even in his first feature, whose dynamic cutting remains thrilling even today. The blu-ray set also includes Eisenstein's long lost first film, the four minute short, Glumov's Diary, filmed for a friend's stage production of "Enough Stupidity in Every Wise Man," which is more interesting as a historical artifact than anything else. A short documentary, "Eisenstein and the Revolutionary Spirit," featuring film historian Natacha Laurent, is actually a very informative overview of the Soviet Montage movement, covering Eisenstein's contemporaries as well as the master himself, from his cinematic beginnings in the 1920s to his tragic end under Stalin, where he faded away, barred from filmmaking, after criticizing the dictator in Ivan the Terrible: Part 2.

Zhelyabuzhsky's The Cigarette Girl of Mosselprom is a different animal altogether. A little seen effort from 1924, the film is a surprisingly light romantic comedy, completely dispelling the misconception that all early Soviet films were Communist propaganda. In fact, the word 'comrade' is only mentioned once in Mosselprom, and it is in a completely non-political context. While it passed the Soviet censors, Zhelyabuzhsky had no political agenda - he simply wanted to entertain. And entertain he does. Mosselprom bears little resemblance to many other Soviet films of the time, eschewing the radical editing and photographic tricks favored by his contemporaries, and instead delivers a rather straightfoward screwball comedy about a young cigarette girl who becomes the object of affection of three different men - a lonely clerk, a charismatic cameraman, and a ruthless American businessman.

While hardly groundbreaking or revolutionary, The Cigarette Girl of Mosselprom is a real charmer, but perhaps most important for cinephiles, it offers a rare glance behind the scenes of Russia's Mezhrabpom-Rus Studios, before turning into an oddly self-reflexive meta movie within a movie that feels like a very early precursor to the work of Charlie Kaufman. The DVD is completely devoid of extras, but films like this are lucky to be on DVD at all, and are honestly a special feature unto themselves. And while these two films could not be more different, they offer a window into early Soviet life that is both fascinating and compelling. Mosselprom is an interesting time capsule, but Strike is essential viewing for cinephiles, and Kino's presentation here is terrific and should not be missed.