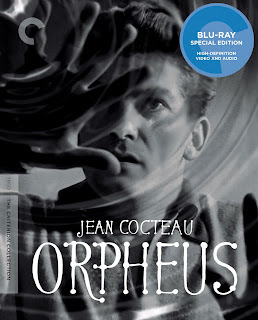 While he is perhaps more widely known for his  lovely 1946 adaptation Beauty and the Beast, Jean Cocteau's finest achievement is arguably Orpheus, a 1950 update on the Greek myth of the same name.

In mythology, Orpheus was a great musician who became so enamored with his art that he completely ignores his wife, who dies without his knowledge. Grief stricken, he follows her into the underworld to reclaim her. Touched by his show of devotion, Hades agrees to return his wife to him, on the condition that he not look back at her until he has left his kingdom.

The temptation, however, proves too much for Orpheus, who turns around to gaze on his beloved wife, and she vanishes forever, and he is torn apart by the Furies. It's an archetypal Greek tragedy that has seen many variations throughout history in different cultures (the myth is strikingly similar to the Biblical story of Lot in Sodom), and Cocteau gives it a mostly faithful modern iteration here.

Jean Marais, who portrayed the Beast in Beauty and the Beast, brings a fiery intensity to the titular role, cast here as a self absorbed poet who has a brush with death when she comes to spirit away a rival poet. The encounter leaves him shaken and intrigued, and he becomes obsessed with finding her again, constantly monitoring radio broadcasts of poetic snippets that he believes are meant especially for him. He stays so glued to the radio, afraid of missing any of the broadcasts, that he stops paying attention to his wife, who despite her strongest attempts to get his attention, begins to fade from his life. He even pushes her away as she tries to join him by the radio, rebuffing her advances.

It is here where Cocteau deviates from the classic myth. In his re-imagining, Death is in love with Orpheus, and while he is distracted by the broadcasts, she visits his wife and steals her away out of jealousy. One of her minions alerts Orpheus, and he pursues them into the underworld, where he appears before a disciplinary tribunal, who in light of the circumstances allows him to return to the surface with his wife on the condition that he never look at her again. It is, of course, an impossible task, but in Cocteau's Orpheus, his relationship with his wife isn't nearly as important as his relationship with death.

For Orpheus, his wife represents a sort of living death, a type of stagnant domestication that is less desirable than death itself. Death herself is mysterious, vivacious, a lofty ideal that appeals to the poet within. It is part of Cocteau's grand statement of artistic purpose in what is perhaps his most personal film. "It is much less a film than it is myself," he is quoted as saying, and indeed Orpheus is an incredibly self-reflexive work - from the none-too-subtle casting of his then lover, Edouard Dermithe as a young poet who has displaced Orpheus in the public eye, opposite his former lover, Jean Marais, to the patterning of the character of Orpheus after himself, the film is thoroughly infused with Cocteau's own embracing of poetry as film form. It's a fascinating window into an artist's soul, and a wrenching testament to longing and unrequited love.

Cocteau saw film as a kind of poetry on celluloid, and never is that more clear than in Orpheus, which is the director's ultimate statement of his own artistic philosophies. Criterion's blu-ray presentation opens up its exquisite mysteries in a way never before seen. Its liner notes alone read like a mini dissertation on what is essentially Cocteau's artistic manifesto, deepening ones appreciation of the film and for the director's fine craft. Like Beauty and the Beast, Orpheus broke new ground for cinematic fantasy, and while Cocteau is clearly going for a more adult audience here, it is almost even more magical. Cocteau was a master of cinematic fantasy, and the special effects here, while primitive by today's standards, are surprisingly effective, and look terrific in HD. Criterion's transfer is simply gorgeous, preserving the film's grain while making it look sharper than ever without compromising the film's visual integrity.

The disc also includes the 1984 feature length documentary, Jean Cocteau: Autobiography of an Unknown, as well as "Jean Cocteau and His Tricks," a 2008 interview with Cocteau's assistant director on the film, Claude Pinoteau. It's a fabulous presentation of not only one of the great achievements in fantasy, but one of the landmarks of French cinema.

Orpheus will be released on DVD and blu-ray from The Criterion Collection on Tuesday, August 30.
Email Post