In light of several leaked photos from the set of The Dark Knight Rises, Warner Bros. has released its own, official first look at Anne Hathaway as Selina Kyle/Catwoman. 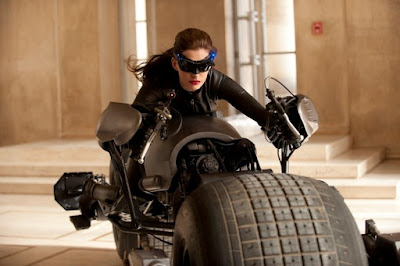 It's interesting that Warner continues to refer to Hathaway's character as Selina Kyle rather than her alter-ego, Catwoman. From the looks of the decidedly un-catlike suit, it could be that Nolan and company are going for a kind of cat burglar aesthetic, in keeping with their more realistic take on the Batman universe. It could be that the name Catwoman might not come up at all. It will be interesting to see where Nolan takes it.