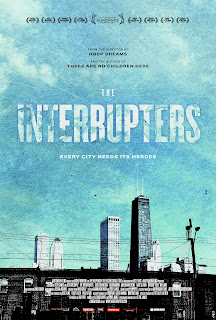 In one of the most heartbreaking moments from Steve James' harrowing new documentary, The Interrupters, a young girl sits in a classroom, recounting an altercation in her neighborhood that led to deadly violence. Her voice begins to crack, and tears begin to flow. She chokes up, and is unable to finish her story. The wound is too raw, the memory too painful.

For far too many children in Chicago's south side, this is a common occurrence as gang violence has reached near epidemic performances. Chicago's problem with violent crime gained national attention in 2009 when 16 year old Derrion Albert was brutally beaten in the streets during a brawl that was recorded and posted on YouTube. The video caused mass outrage from citizens, and lots of pontification from politician about saving America's youth and cleaning up our streets. But while the politicians wagged their fingers and preened in front of the camera, one group had the courage to stand up and do something, and that group is the subject of The Interrupters.

They call themselves CeaseFire, an organization founded by Gary Slutkin whose mission is to mediate conflict and prevent urban violence. The volunteers are called "violence interrupters," and are made up of former gang members and street thugs who are no strangers to inner city violence. Each one has reformed their lives and now seek to stop others from making the same mistakes they did, hopefully saving lives in the process.

The film focuses on three such interrupters - there's the fiery and indomitable former gang enforcer Ameena Matthews, the daughter of Jeff Fort, one of the most notorious gang leaders in Chicago's history. During the course of the film, Ameena mentors a troubled 18 year old girl whose struggles to stay out of trouble make up some of the film's most dramatic moments. There's Eddie Bocanegra, whose life behind bars for a murder he committed as a teenager has given him a new outlook on life. And then there's Cobe Williams, whose father was murdered when he was just a boy, leading him to a life of crime he put aside for his family, and now devotes himself to helping others.

Each interrupter is unique in their own way, but their dedication and and hard work are a true inspiration. Ameena is an especially engaging presence, commanding the screen whenever she is on camera. But she isn't a camera hog - she's a naturally domineering presence whose no nonsense attitude gives the film an unforgettable personality.  Filmed over the course of a year, The Interrupters goes to the front lines of the war against urban violence, where violence interrupters sometimes step into the middle of escalating conflict and try to diffuse tense situations at their source. As former offenders themselves, these interrupters carry a greater credibility than outside voices, and their work is invaluable. James rightly explores the roots of violence, and those who seek to put an end to its vicious cycle.

It's a compelling and ultimately redemptive documentary. James takes us into a world few outsiders ever get to see. These streets feel almost alien, like a war zone in a third world country. But this is no war zone - this is America, and the interrupters are a beacon of light in the darkness, a true voice of change and reason. The film deftly avoids manipulation and instead provides a clear eyed portrait of people whose lives have been forever changed by violence, trying to change the lives of others for the better. This is essential, issue-based documentary filmmaking without the usual ham-fisted histrionics. This is real, this is raw, this is compelling and ultimately deeply moving stuff. So many films try to be inspirational; The Interrupters actually is.