Well this will be a great tagline for the eventual US poster of Tom Six's The Human Centipede II (Full Sequence) - "BANNED IN ENGLAND!" 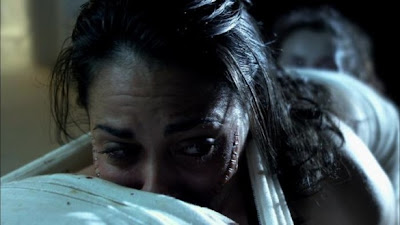 Empire is reporting that the British Board of Film Classification has rejected the sequel to last year's cult hit, saying that it "poses a real, as opposed to a fanciful, risk that harm is likely to be caused to potential viewers" and "would be unacceptable to the public." As such, the film will not be allowed to show in theaters or be released on DVD in the UK.
You can read the BBFC's full reasoning here (warning: it's pretty graphic), but I have to say that this is an outrageous decision. A country as advanced as the UK should not be banning or censoring films. Who are they to decide what is acceptable or not acceptable for adults to watch? Every member of this board should be ashamed of themselves.
I was not a big fan of the original film, but just because they found the content of the sequel objectionable does not mean they have the right to tell people they cannot see it. It's a tyrannical, puritanical decision that should be condemned by all freedom loving people for its chilling implications. This is not about horror or whether or not people want to see the depravity present in the film - it's about freedom. And anyone who believes in freedom should be against this decision.
Email Post