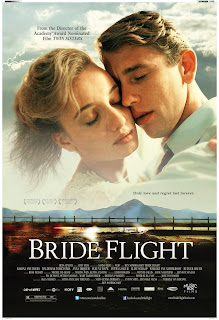 The most unusual thing about Ben Sombogaart's otherwise rather straightfoward romantic drama, Bride Flight is the presence of the hobo with a shotgun himself, Rutger Hauer. He's actually the highlight of the film, despite his extremely limited screen time.
It isn't spoiling anything to say that Bride Flight opens with Hauer's death. Here he plays Frank, the elderly owner of a vineyard whose vineyard brings three women to his winery in New Zealand to mourn his passing. Who are these women, and what was their relationship to Frank?

The film answers these questions mostly through flashback, when all three were young brides flying from Holland to New Zealand to start a new life and populate the relatively new country. The titular flight is only small part of the film. The important stuff actually happens later, after the flight is over. For these three women, the flight is only beginning of a new and exciting new chapter in their lives. 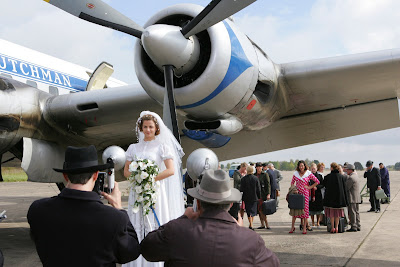 There is Esther, an aspiring Jewish fashion designer running from the tragedies the befell her family during the Holocaust; Marjorie, whose idealistic dreams of a perfect family seem forever out of reach; and then there is Ada, who makes a special connection with Frank during the flight despite being promised to another, more traditionally religious man whose baby she is carrying. Together the three women embark on a new adventure in a strange and foreign land. It's a sweeping romantic tale in the tradition of Out of Africa and Nowhere in Africa that recalls a kind of grand filmmaking we rarely see anymore.
The problem it that it often seems like a pale imitation of that sort of film. It's a pleasant and agreeable experience for those that enjoy this sort of thing, but there's nothing particularly extraordinary about it. A conflict involving Marjorie's inability to conceive, leading to her secret adoption of Esther's child provides the film with a shot in the arm about halfway through, but at 130 minutes long, the film has a tendency to drag. 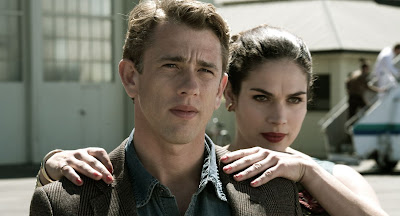 If Bride Flight were an American film, it would be the kind of prestige fare that studios release at the end of the year in hopes of garnering Oscar nominations, and indeed the film has the feel of a typical Best Foreign Language Film nominee - finely crafted and nice to look at but ultimately schmaltzy and hollow. I would hesitate to call Bride Flight hollow, but it is occasionally uneven. Director Ben Sombogaart has a fine, if not exactly groundbreaking visual sense that makes the film consistently watchable, but it seems to be missing something somewhere, that extra spark to make it truly memorable. The characters don't really stand out, and their relationships with Frank remain underdeveloped and uninvolving.
I kept wanting for Rutger Hauer to play more of a role in the film, but his presence is pretty much limited to the opening scene, after which he is a body in a casket for the rest of the film. I just wanted more from it. It's a perfectly nice film, but a film should aspire to be more than just nice. It's a stubbornly pedestrian art house beach read, a yuppie book club selection of a film that entertains in the moment but is forgotten just as quickly.
GRADE - ★★½ (out of four)
BRIDE FLIGHT | Directed by Ben Sombogaart | Stars Elise Schaap, Karina Smulders, Karina Smulders, Waldemar Torenstra, Rutger Hauer, Pleuni Touw, Petra Laseur, Willeke van Ammelrooy | Rated R for a strong sex scene and some graphic nudity | In Dutch w/English subtitles | Opens Friday, 6/10, in select cities.
Email Post