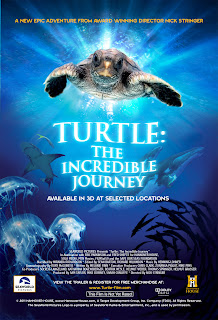 It would be easy to say that nature films are a dime a dozen. Nature docs have been a staple of the medium as long as documentaries have been with us, and yet somehow they continue to find ways of showing us things we've never seen before.

Turtle: The Incredible Journey is certainly not the first time the story of the sea turtle has been told, and it probably won't be the last. Anyone who has ever watched the National Geographic channel is familiar with its perilous migration. But never has it been told quite as memorably, or as beautifully, as this.

Presented by Sea World and narrated by Miranda Richardson, Turtle: The Incredible Journey follows the life of one little loggerhead turtle, from the beach on which she was born, through her harrowing migration through the Gulf Stream, on a 21 year odyssey to motherhood that will complete the circle of life.

It will be a long and dangerous road. The little turtle will not only face hungry crabs mere minutes after emerging from the sand, but hungry jellyfish, sharks, birds, and even human predators as she journeys to adulthood. It is a herculean effort, staggering in its scope and awesome in its singular perseverance. Director Nick Stringer films our turtle protagonist like a conquering hero on a grand adventure, and saves us the pandering of anthropomorphizing her into a warm and fuzzy humanized creature.

One wonders, however, just how much of this "documentary" was staged for cameras. Scenes in which the turtle encounters a massive freighter and a group of fishermen who catch and then release her are particularly suspicious, not to mention the sheer implausibility that this is the same little loggerhead turtle over the course of the entire film, which supposedly spans 21 years.

But to focus on shortcuts made for the sake of creating a compelling narrative is missing the point. The film assembled here is a stunning portrait of one of the natural world's greatest migrations, and even if the turtle portrayed in the film is not the same turtle all the way through, it's still representative of a journey made by thousands of similar loggerheads. There are lots of amazing sights to be seen here, and while gorgeous natural scenery is one of the selling points of the film, it's still a compelling story of survival.

It gets a bit melodramatic at times Henning Lohner's score, while at times quite powerful, is often overbearing, and seems to over score moments that would have been better served by subtlety, allowing the images to speak for themselves. Still, it's hard to pull focus away from the sheer majesty of the story and its stunning imagery. Stringer displays an appropriate awe in the face of mother nature that is infectious, making this one incredible journey that is well worth taking.