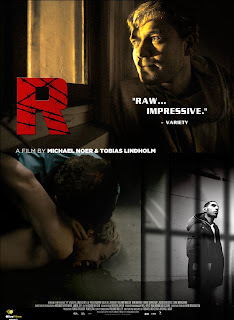 Historically, I've never been a big fan of prison dramas. I don't know if its the genre itself I find off-putting, or if it just so happens that none of them have ever really spoken to me. Either way, its a genre that I haven't found particularly interesting, even when everyone else seems to (I think The Shawshank Redemption is one of the most grossly overrated films of all time).
I found myself in a similar boat two years ago when Jacques Audiard's A Prophet was getting praised by seemingly every other film critic out there, while I found myself oddly indifferent to the film.
Tobias Lindholm and Michael Noer's new prison drama, R, plays out like a Danish remake of A Prophet. However, I think it is actually a superior film. It eschews Audiard's more grandiose elements that I felt hindered that film, opting instead for a simpler and more streamlined narrative, albeit one that has a definite air of familiarity. 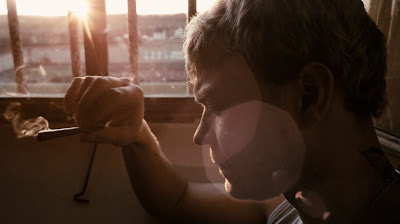 Lindholm and Noer have stated that they did not want to make a typical prison film, that they "wanted to set ourselves free of cliches." And while I do not believe they achieved that goal, they did make a pretty solid film, which is an achievement to be proud of in itself. They took a familiar storyline and turned into a strong and effective drama without all the fuss.
The titular R stands for Rune, a new prisoner who is brought into Denmark's toughest prison to serve time for assault. With only a two year sentence, he doesn't have much time to serve, but his journey will not be an easy one. R follows his attempts to navigate the intricacies of daily prison life, as he tries to survive by carving out a niche for himself in order to climb the inmates' social ladder. The method he chooses is drug trafficking, enlisting the help of an Arabic inmate on another floor to help. But soon he begins to attract the attention of various gangs within the prison, and his enterprise is no longer free. Rune's situation becomes extremely perilous as his loyalties run up against a series of conflicting interests with potentially deadly consequences. 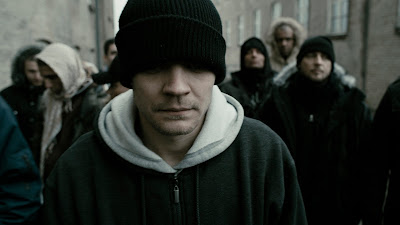 It's surprising just how much the film's plot resembles that of A Prophet, although I don't think it was intentional. Lindholm and Noer take the story in a different direction, and the film is all the better for it. They even make a brave choice about 3/4 of the way in that could have spelled death for the film, but instead it adds a greater emotional impact. Violence begets violence in a neverending cycle, and R's outlook is undeniably bleak. Even its title is dehumanizing, referring to Rune only by the first letter of his name, stripping him of his identity and individuality. He is just another prisoner, a statistic among many. It's both a damning portrait of Denmark's prison system and a surprisingly introspective thriller, dealing with the psychological toll prison begins to take on Rune.
It does, however, suffer from some of the same mundane trappings of its genre. It's ultimately a film about a new guy trying to find his place in the rough edged prison hierarchy, which is nothing new. Rune must survive by listening to others, cleaning their cells, carrying out hits. It's all very familiar territory, albeit well done and powerfully acted, and even contains moments of disarming beauty. Thankfully, it never once feels staged. Lindholm and Noer create a very naturalistic atmosphere, aided by on location shooting at Horsens State Prison, Denmark's most notorious prison, which was shutting down as the film was beginning photography. It adds a sense of history to the film, a dark, never-ending spiral of violence and despair contained within its dank walls. You can almost smell the sweat and the blood, and if that is a compliment, then R gets it just right.
GRADE - ★★★ (out of four)
R | Directed by Tobias Lindholm & Michael Noer | Stars Pilou Asbæk, Dulfi Al-Jabour, Roland Møller, Jacob Gredste, Kim Winther, Omar Shargawi | Not rated | In Danish w/English subtitles | Opens Friday, June 17, at the Quad Cinemas in NYC.
Email Post