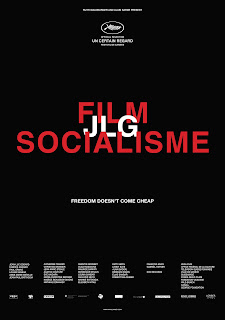 At the end of his 1967 film, Weekend, legendary director Jean-Luc Godard famously declared the "end of cinema." It was a bold, and some would say narcissistic statement, and a prediction that ultimately proved false, both literally and figuratively.

And although cinema didn't end, it certainly did spell the end for the film movement that Godard had helped give life to, the French New Wave, sending the filmmaker into a period of underground, often extremist filmmaking from which he never quite reemerged.

But even if cinema isn't over, you couldn't tell it from Godard's latest work, Film Socialisme, a film that is as doggedly impenetrable as it is anti-cinematic. If Godard truly thought cinema was dead, his declaration has become a self-fulfilling prophecy. This isn't a film - it's a completely unwatchable ordeal. I've never had a root canal, but I'm pretty sure it would be preferable to Godard's pretentious naval-gazing. 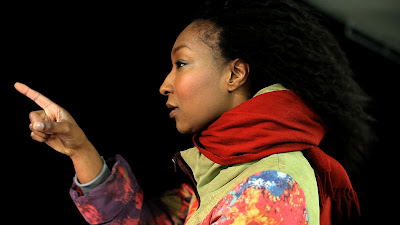 Nadège Beausson-Diagne as Constance in Jean-Luc Godard's FILM SOCIALISME.
Courtesy of Lorber Films.
Neither narrative nor documentary, Film Socialisme is more of an essay on film (I hesitate to call anything about it cinematic, because it's anything but), an aggressively cerebral screed on the decline of the European Union. The film is largely set on an ocean liner, a garish Capitalist tourist trap Godard shoots in everything from 35 mm to a cell phone camera, making for a largely disjointed and disorienting viewing experience. Godard clearly has something to say here, but it's buried amid the seemingly random, aimless ditherings of a director who is clearly punking us. There are arbitrary shots of cats, disembodied laughter, and terse, choppy dialogue interspersed with quotes from literary giants such as William Shakespeare, Jean Paul Sarte, and Joseph Conrad.

There are times when Godard even seems to be going for a David Lynch type vibe, but none of his ideas are ever present long enough to create any kind of lasting impression, much less a cohesive presence. It's almost as if the entire film is Godard's idea of a joke, tricking the audience into thinking they're going in to see another work by one of cinema's greatest masters, only to be hit with this pretentious collection of free-associative ramblings. 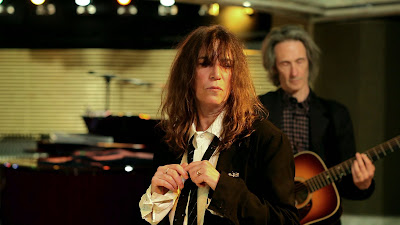 Patti Smith as La chanteuse in Jean-Luc Godard's FILM SOCIALISME.
Courtesy of Lorber Films.
There are moments of beauty in Film Socialisme, flashes of the once great director we all know and love. But unfortunately they never jell into anything resembling a film. It appears as if Godard is going for an avante-garde evocation of the state of the EU, but his thesis is completely obstructed by his stubborn refusal to allow the audience in. He pushes us away at every turn, almost as if he never wanted us to get the point in the first place. It's a Brechtian nightmare, a film stuck frustratingly inside its own head. Godard even ends the film with a black title card, with bold white letters boldly proclaiming "No comment." Like his brazen declaration of "End of film. End of cinema" at the end of Weekend 40 years ago, it's as if Godard is once again flipping us the cinematic bird, but this time he doesn't have the substance to back himself up. It's an insulting, condescending move that displays nothing but contempt for his audience.

One of the phrases that pops up in the film is "successful dissonance." I actually can't think of a better phrase to describe the film, save for the successful part. It's dissonant, all right, maddening and obtuse all once - but all Godard has succeeded in doing here is burying his head firmly up his own ass.