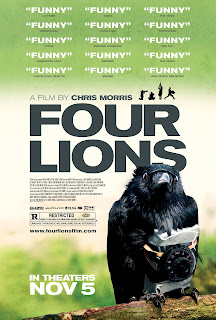 Watching Chris Morris' hilarious new comedy, Four Lions, I couldn't help but be reminded of Harry Potter. Not thematically or aesthetically of course, but of the scene in Harry Potter and the Prisoner of Azkaban where Harry and his friends are faced with a boggart, a creature that takes the form of whatever the person facing it is most afraid of, and the students must cast a spell on it to make it look ridiculous, thus draining it of its fearsome power. Four Lions does much the same thing for the face of modern terrorism.

The plot of Four Lions centers around four British jihadists whose dream is to serve Osama bin Laden and sacrifice themselves for Islam, thus earning the 72 virgins and yada yada yada. The problem is that they are all complete idiots. Whether they are traveling to Pakistan to train with al Qaeda, or attempting to execute their own terrorist plot in London, these four "lions" can't seem to do anything right. 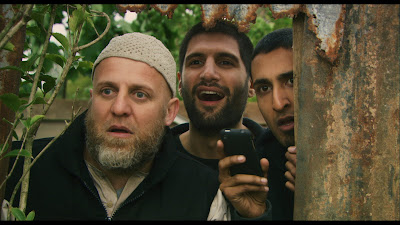 Pictured from left to right: Nigel Lindsay, Kayvan Novak, Arsher Ali in FOUR LIONS by Drafthouse Films, All Rights Reserved.
Their leader is Omar (Riz Ahmed), a dedicated Muslim family man who is the only one among them with a modicum of sense, but is surrounded by so many morons that his plans can never get off the ground. Waj (Kayvan Novak) is his right hand man, but since he doesn't really have a mind of his own, Omar does all the thinking for him. Barry (Nigel Lindsay) is a white Muslim convert who isn't so much dedicated to Islam as he is just a disgruntled misanthrope looking to channel his deep dissatisfaction with the world around him with something that involves explosives and telling other people what to do. Then there is Faisal (Adeel Akhtar), who is too afraid to blow himself up, so he is trying to train cows to fly through windows with bombs instead.

Needless to say these four aren't getting very far, and that is the beauty of Four Lions. Rather than cheapening or downplaying the serious nature of terrorism, Morris instead holds it up to the light, exposing these extremists for the ideological buffoons that they really are. That is not to discount the cold calculation that goes into planning horrific terrorist attacks, nor the tremendous amount of human suffering that comes from them, instead Morris understands that sometimes the best antidote for fear is laughter. To coin the common post-9/11 maxim, if we walk in constant fear of terrorism, then the terrorists truly have won. 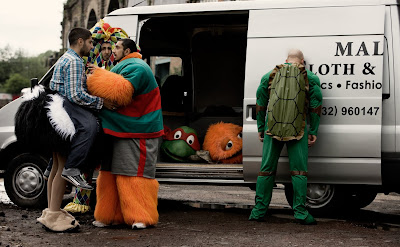 Pictured from left to right: Kayvan Novak, Arsher Ali, Riz Ahmed, Nigel Lindsay in FOUR LIONS by Drafthouse Films, All Rights Reserved.
Morris holds modern terrorism up as a boggart to be mocked and ridiculed, dressing it up in silly costumes (both literally and figuratively) and strips it of its psychological power. While real threats must be taken seriously, the ridiculous and hateful ideologies that fuel these jihadists cannot, and Morris clearly understands the difference. Make no mistake, Four Lions is a farce, filled with buffoonish characters and outlandish situations, but it actually does have a serious message - sometimes the best medicine is laughter.

In his director's statement, Morris says:

Where’s the joke in terror? Actually, as Four Lions will demonstrate, it’s staring you right in the face. At training camps young jihadis argue about honey, shoot each other’s feet off, chase snakes and get thrown out for smoking. When 9/11 hijacker Mohamed Atta was teased for pissing too loudly, he blamed the Jews for making thin bathroom doors.

Four Lions makes a pointed mockery out of such self important lunacy. Plot-wise it's a bit disjointed, but the satire is so sharp and the humor so riotously funny that the final product is a great success. "Terrorism is about ideology," Morris says, "but it’s also about imbeciles." Never has that point been so bravely or so hilariously made as in Four Lions - a clever and original comedy that, above all, refuses to let the terrorists win.

Jasper L'Estrange said…
Great review. "Four Lions" is one of my films of the year. Keep up the good work.
6:21 PM