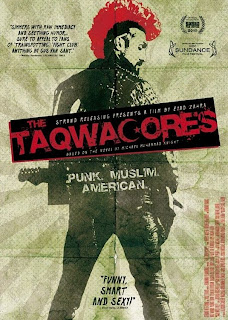 It is refreshing, especially in today's heightened political climate, to see Muslims portrayed as human beings rather than monsters or terrorists. That is the central idea behind Eyad Zahra's The Taqwacores, which sadly falls short of its goal.

Based on the novel by Michael Muhammad Knight, The Taqwacores is the story of Yusef, a Pakistani engineering student who moves into a house off-campus with a group of Muslim "punks," young men and women who refuse to conform to religious and societal norms while still remaining true to Allah as they understand him. They are united by their love of "Taqwacore," a form of punk rock music of Muslim origin, with band names like the Guantanamo Bay Packers and Osama's Tunnel Diggers. Each tenant represents a different facet of Muslim culture, and a different marginalized segment of society. Their faith brings them together under one umbrella as part of a larger society that is becoming increasingly shunned by a growing segment of America - but one this is clear, these are not the Muslims FOX News told you about.

Bobby Naderi and Dominic Rains in Strand Releasing's THE TAQWACORES.
The problem with the film is that it paints with such broad strokes. The characters are a collection of cliches, cardboard representations of different subcultures that never dig below the surface. There's the feminist (who wears a decorated burqa for irony), the gay guy, the punk rocker, the skateboarder, the Asian, the religious conservative, the list goes on and on. If Zahra wanted to portray diversity within the Muslim world, he does these subcultures disservice with such thin characterizations. All the while, Yusef remains a passive and bland protagonist. He's more of a guide meant to be a sort of channel for the audience, but instead he fails to inspire interest. By the time the film reaches its conclusion, any emotional impact it could have had is lost in a sea of weak storytelling crutches and a muddled narrative.

The Muslim punk scene that the film chronicles is a fictional one, although in a case of life imitating art, the novel did inspire a real one that still exists. You have to admire Zahra's fervor in showing the world that Muslims are not the Jihadist murderers that many try to paint them as, but the almost cartoonish caricatures that are the film's characters betray that goal at every turn. Yes, Islam is not the religion of violence and terror we often see on the nightly news, but it's much deeper and more complex than The Taqwacores suggests as well.

Ian Tran, Nav Mann, Volkan Eryaman, Bobby Naderi, Dominic Rains, Tony Valda, and Noureen DeWulf in Strand Releasing's THE TAQWACORES.
The film fails to portray its characters as actual people, instead they are paper-thin representations of very broad cliches. Even its portrayals of anti-Muslim sentiments lack nuance (not that the sentiments themselves had any nuance to begin with). It's hard to deny that its heart is in the right place, but The Taqwacores never seems to establish its own identity. There are too many characters and not enough development of any of them to amount to anything that can truly get across the message it's trying so hard to convey.

It's a missed opportunity that is at once strenuously sincere and painfully misguided - a ham handed cry for tolerance that doesn't do its characters, or its subject, justice.