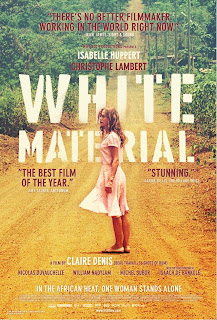 There are few things in cinema more worthy of excitement than a new film by Claire Denis. One of the most interesting and consistently excellent directors in the world today, Denis is responsible for some of the finest films of the last decade, including Beau Travail and 35 Shots of Rum (one of my top ten films of last year).

Her latest film, White Material, reunites her with one of her favorite themes, French/African relations, and unites her with one of France's greatest actresses, Isabelle Huppert, for the first time. It turns out to be the match made in Heaven that one would expect, and even though Huppert has appeared completely exposed in many of her films, never has she seemed quite so emotionally naked. A striking, regal beauty in real life, Huppert has never seemed so careworn or, dare I say it, old, as she does in White Material.

As Maria Vial, a French coffee plantation owner in an unnamed African country, Huppert exudes a haunted vulnerability, brought on by the societal turmoil she suddenly finds herself surrounded by.

Isabelle Huppert as Maria Vial in WHITE MATERIAL directed by Claire Denis.
An IFC Films Release
Having lived in Africa so long, she feels as much a part of the land as the native Africans who work for her. But times are changing, and the country is in upheaval. The French army, which has occupied the country for the better part of a century, is withdrawing, leaving the country to its fate and evacuating all remaining French nationals. Maria, however, refuses to leave her life behind and stays on the plantation with her husband André (Christophe Lambert) and son Manuel (Nicolas Duvauchelle), a no account slacker who Maria worries is wasting his life. As the French army withdraws, the new native government is busy tracking down rebel factions, specifically one led by a man known only as The Boxer (Isaach De Bankole), who is hiding with the Vials. Through sinister, whispery radio transmissions, the seeds fear and dischord are sewed amongst the populace, as the countryside is terrorized by roving gangs of child militants. It's a volatile situation, but Maria refuses to abandon the life she fought so hard to create.

Huppert's eyes suggest a woman who has lost everything but is willing to do anything to get it back. Through her own denial of the danger she and her family are truly in, she finds within herself a strength she didn't know she had. The "white material" of the title refers literally to the dismissive term used by the native Africans to describe the superfluous material trappings of white society. But much bigger than that, it really refers to the strife brought upon Africa by colonial intervention. The societal rot, the violent death squads, the human pain and suffering that is a direct result of colonial interference and years of oppressive rule is the real white material, and the Vials find themselves left behind to reap what has been sewn years before them.

Isabelle Huppert as Maria Vial and Christopher Lambert as André Vial in WHITE MATERIAL directed by Claire Denis.
An IFC Films Release
Denis crafts her symbolic narrative with elegance and a staggering formal mastery. Her compositions are flawless and tonally precise. Denis' innate ability to craft a memorable atmosphere is on full display here, drawing the audience in with a mere glance or a whisper. There is not a single wasted shot or throwaway line. She says so much with so little, as does Huppert, whose careworn face suggests a woman who has seen her entire life disappear in an instant.

Everything about White Material is infused with meaning. By not revealing the name of the country, Denis presents an Africa that is not necessarily an Africa that actually exists, but a representation of the societal decay that is brought on by colonialism. And while the narrative itself isn't exactly the point, Denis so enthralls the viewer that it becomes a compelling and riveting experience in its own right. Juxtaposing bitter ironies (a church with a sign reading "God never gives up" is revealed to contain the bodies of slaughtered Africans) and white arrogance, White Material refuses to be yet another lament for "poor Africa. It's a lament all right, a guttural cry of anguish, but Hotel Rwanda this isn't. Denis isn't interested in a straightforward, black and white approach. What she achieves here is much more subtle and lyrical. Like her best work, White Material is a deeply reflective collection of moments, both of great beauty and great horror, and it continues to reveal its treasures upon repeat viewings. It is a feast, and for both fans of Denis and newcomers to her talents, it delivers plenty of extraordinary material to explore.