Capsule Reviews | "Me, Too" and "Nothing Personal"

Álvaro Pastor & Antonio Naharro's Me, Too (Yo, Tambien) may have one of the most uncomfortable sounding premises of any film this year. It's the story of Daniel (Pablo Pineda), an extraordinary man with Down Syndrome who became the first man in Spain with the condition to receive advanced university degrees. Determined to lead as normal a life as possible, he takes an office job as a social worker for disabled people. He is, in every respect, a "normal" man with the body of someone with Down Syndrome, and along with it comes a powerful sex drive. He falls in love with a co-worker named Laura (Lola Duenas), a troubled woman with a checkered past and self-confidence issues. 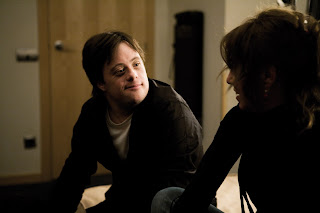 The two forge a tentative and unusual friendship, but while Laura wants to keep it at that, Pablo wants something much more, something society tells him he can't have. Soon the prospect of leading a "normal" life seems an impossible dream, and he begins to resent his parents for pushing him to succeed in spite of his handicap.

It's a premise that has schmaltz written all over it, but it's a surprisingly mature take on difficult themes, treating its subject with the dignity and grace it deserves. It may touch on uncomfortable topics such as Downs Syndrome and sexuality, but it tackles them head on whereas they are usually swept under a rug. Pineda, a first time actor who actually was the first man with Down Syndrome to graduate from university in Spain, is extraordinary as Daniel, and adds an extra dimension of experience to the film's credibility.

Points must be given to it for attempting to take on this subject in an intelligent and unsentimental way, and while it doesn't always succeed, it's a noble and often compelling effort - a strange and moving tale of love and compassion that gives its characters the respect they deserve.

Unusual friendships is also the theme of Urszula Antoniak's Nothing Personal, a strangely beguiling May/December romance about a fiery and independent Dutch girl named Anne (Lotte Verbeek), who leaves behind her home in the Netherlands to trek across Ireland on foot. She survives by scavenging for food, refusing the help of strangers, determined to make it on her own. That is until she meets Martin (Stephen Rea), an older hermit living alone on the island. He gives her shelter and food in exchange for work, which she accepts on one condition - there is to be no exchange of personal information between them. No names, no histories, nothing. He refers to her simply as "you." 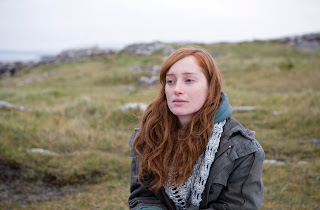 Their initially terse relationship soon becomes something akin to mutual respect, then later to friendship. But whereas the anonymous nature of their relationship is initially liberating, it soon becomes much stronger, and the two find in each other something they never thought they would find again.

Nothing Personal is a strangely beguiling, if slight, romance; beautifully filmed and acted by its two leads. If the final product is a bit unmemorable and anonymous (much like Anne and Martin's relationship), it isn't due to the efforts of the actors. It's the kind of film that illicits responses such as "that was nice" but never really digs deeper or goes beyond that. It's a fine viewing experience in the moment, but viewers may find it fades rather quickly.

ME, TOO and NOTHING PERSONAL are now playing in NYC. Both films open Friday, November 26, in LA.
Email Post