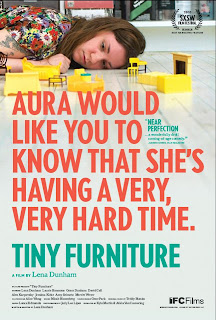 There is an entire subgenre out there about disaffecting twenty-somethings drifting through life trying to find themselves. Very few of them, however, are as clever or as wise as writer/director/star Lena Dunham's Tiny Furniture, the Best Narrative Feature winner at this year's SXSW Film Festival.

In many ways it is exactly the kind of twee indie festival film that one would expect it to be, but Dunham's unique voice adds something special to the proceedings that so many of its peers lack - honesty.

Tiny Furniture is a kind of summation of Gen-Y hopes and fears, a generation of young people who came of age during the Bush years and now find themselves graduating and entering the real world in a time of economic downturn and general social anxiety. It is a generation to which I belong, and its characters are very much people I recognize. 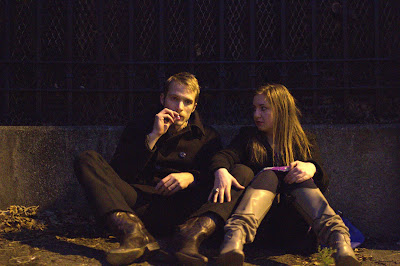 David Call as Keith and Lena Dunham as Aura in TINY FURNITURE directed by Lena Dunham.
Photo by Joe Anderson. An IFC Films Release.
Dunham herself stars as Aura, a recent college graduate who has returned home in hopes of finding a job and getting an apartment with her best friend. The problem is she still has no idea who she is or what she wants to be, despite societal pressures to the contrary. Her mother is an aloof and distant photographer, her younger sister is a child genius, but Aura is just, well, Aura. Plain, un-extraordinary Aura. She gets a job as a hostess as a restaurant, but finds it boring, and not at all what she went to school for. She is unlucky in love, and the only friends she has are strange figures from her past she doesn't really even like to begin with. She strikes up a tentative friendship with an internet celebrity who makes comedy videos on YouTube, while harboring a crush on a chef at work. But life just isn't working out the way she pictured it, and she is as disconnected from life as she is to the tiny articles of furniture that her mother became famous for photographing.

While it is overly precious at times, Tiny Furniture is a disarmingly mature work. It doesn't try to put any schmaltzy Band-Aids on real problems, nor does it wallow in self-pity. Dunham achieves her goals with a great sense of self-deprecating humor, and thankfully never mistakes the over-use of indie rock songs for emotional depth like so many other, similarly themed films do. No, Dunham shows a directorial restraint that is wise beyond her years, and while it is very much a film of its time and of her generation, there is a keen sense of self-awareness at work here. 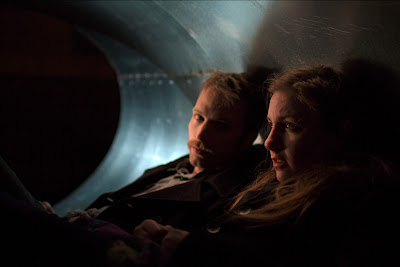 David Call as Keith and Lena Dunham as Aura in TINY FURNITURE directed by Lena Dunham.
Photo by Joe Anderson. An IFC Films Release.
Dunham may be young, but unlike the character she portrays, there is a unmistakable sense that she knows who she is, as a person and as an artist. Her work on Tiny Furniture is confident and assured, her writing sharp and witty. She has her finger placed directly on the pulse of her generation, and has given it a striking and curiously moving voice. Adrift in post-college confusion, Dunham sums up Gen-Y's collective anxiety with great warmth and humor without many of the indie comedy cliches we see over and over again. The characters are more than just the sum of their quirks, they're real people. Whether they just lack drive, maturity, opportunity, or all of the above is up for debate, and Dunham makes no attempt to psychoanalyze anyone. Instead she captures a feeling, a kind of unspoken zeitgeist, as much or even more so than David Fincher's much balleyhooed "decade defining" The Social Network. Whereas that film chronicled the lives of Harvard elites, Tiny Furniture focuses on the rank and file of the Facebook generation.

It is a refreshingly frank and unencumbered narrative, just as funny and charming as it is melancholy and moving. Beneath its odd sense of humor there is an unmistakable sadness, a confusion that is common for anyone growing up. But as the world gets tougher, so does getting older, and Tiny Furniture gives voice to the alienated, the lost, and anyone just trying to discover who they are.

Home Theater Fanatic said…
Eagerly waiting for it to release in DVD, will definitely buy it.
5:11 AM