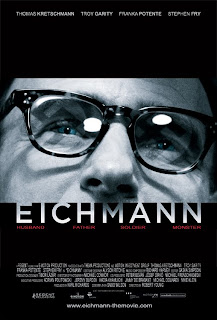 There are few subjects that have been covered as much or as often in film as World War II. In fact, there is such a wealth of material available on the subject that finding films that approach it from a new or unique angle is rare. That is part of what makes Robert Young's Eichmann so interesting, it looks at the aftermath of WWII through the eyes of one of its most infamous figures - Adolf Eichmann, the orchestrator of Hitler's "final solution."

Based on transcripts of Eichmann's final interrogations in Israel after his capture in Argentina in 1960, Eichmann is a game of intellectual cat-and-mouse between Eichmann (Thomas Kretschman) and Avner Less (Troy Garity), the man chosen to carry out the interrogation, with orders to extract a confession with which the Israeli government can justify an execution.

The Holocaust and WWII are only seen through brief flashbacks, while the film focuses mainly on the interviews with Eichmann, contrasting his version of the Holocaust through his own words with the horrible reality. 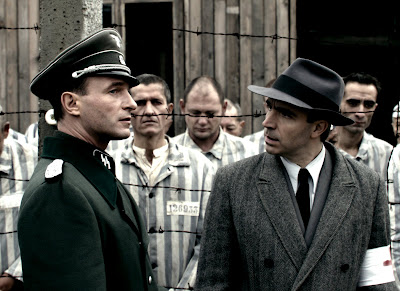 Thomas Kretschmann as Adolf Eichmann Alexis Latham as Dubois.
Kretschmann is terrific as Eichmann, portraying a man who is essentially a wolf in sheep's clothing, but humanizes him without letting him off the hook for his crimes. The film, much like Less, attempts to extend to Eichmann the courtesy that he refused to give so many - humanity. While Eichmann's family isn't given much screen time, their presence is keenly felt through Kretschmann's performance. Less' family, on the other hand, feel like an afterthought in the script, and remain underdeveloped in favor of the central two characters.

Unfortunately, the rest of the film is rather run of the mill. The scenes between Eichmann and Less have a strong energy about them, but the rest of the film feels like a well intentioned but rather rote history lesson. It's all appropriately somber, but almost strenuously so - the use of audio excerpts from an interview with the real Avner Less over the end credits demonstrates the film's admirable sincerity, but one can't help but feel that the film is overestimating its own importance, especially when other, far better films have covered this territory before.