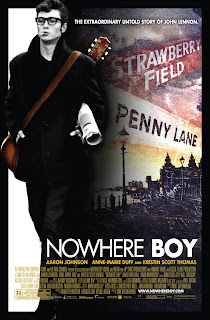 Arriving on US shores the week of what would have been John Lennon's 70th birthday, Sam Taylor-Wood's Nowhere Boy seeks to explore Lennon's teenage years to find out just what made the man who would become one of rock music's greatest icons tick.

The result is sadly less illuminating and more frustratingly pedestrian. There is little here to set Nowhere Boy apart from other, similar music back-story dramatizations.

In Taylor-Wood's vision, Lennon (Aaron Johnson) is just another troubled teen with a guitar. He lives with his aunt, Mimi (Kristen Scott-Thomas, the film's strongest asset), a stern, traditional woman who would much rather listen to Tchaikovsky than rock n' roll, after being taken from his troubled mother, Julia (Anne-Marie Duff), who lives just down the road. Despite Mimi's best efforts, John eventually finds his way back to his mother, and the two form an inseparable, and almost uncomfortably close, bond that almost borders on romance. It's a strange fetishizing of Lennon that grows more and more awkward as the film progresses, and one can't help but wonder how much of that has to do with the director's much publicized romance with her young star. 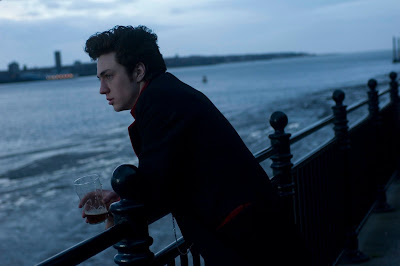 Aaron Johnson stars as young John Lennon in Sam Taylor-Wood's NOWHERE BOY.
Courtesy of The Weinstein Company, 2010
Still, Julia Lennon's influence on John is undeniable, as she introduces him to a world Mimi had actively sheltered him from, and soon John discovers his musical calling, forming a band called The Quarrymen that will eventually grow to include a young Paul McCartney (Thomas Sangster) and George Harrison (Sam Bell). It's all very paint-by-numbers, with Taylor-Wood hitting all the high points but achieving little in the way of emotional depth. The closest it comes is in Lennon's tumultuous relationship with Mimi, and Kristen Scott Thomas' performance is arguably the highlight of the film.

The performances are all uniformly on point, but Lennon never grows to become anything more than a Liverpool bad boy. In fact, he's almost entirely unlikable. And while that isn't necessarily to its detriment, the film's flat characterization of him as an edgy, James Dean wannabe with mommy issues seems to betray its attempt to look deeper into who he was. 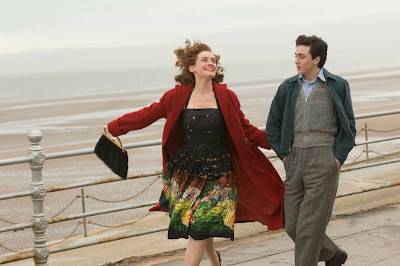 Aaron Johnson as young John Lennon and Anne-Marie Duff as Julia Lennon in Sam Taylor-Wood's NOWHERE BOY.
Courtesy of The Weinstein Company, 2010
Taylor-Wood shows us young Lennon but rarely does she evoke his spirit. The film is a little too neat and tidy for that. Nowhere Boy applies easy, simple answers to deep questions in order to save time, and in the process says nothing about who Lennon really was. It falls into the trap of so many biopics before it - connecting the dots but failing to color them in. It's all very well produced, it is shot and edited with the air of a film of great importance (read: Oscar worthy), but it simply misses the feeling. It is absolutely typical from start to finish - a slick, pretty, and altogether hollow exercise in musical bio-humdrum.

Nowhere Boy is a film of image over substance, something Lennon himself spent a lifetime rejecting. The film not only ignore that, it betrays it. Lennon was by no means a spotless moral hero, but Taylor-Wood goes for image and misses his essence, ensuring that this film will fade into obscurity while Lennon and his music will continue endure.

Sam Juliano said…
I like this one considerably more Matthew, but you've defended your position admirably.
10:30 AM

Matthew Lucas said…
Thanks Sam. This one just didn't do it for me.
7:20 PM