I'm not going to lie, I found this crop of Gotham Award nominees to be completely underwhelming. Which isn't much of a surprise - always first out of the gate by announcing their nominations in October, the Gotham Awards have little relevance in the overall scheme of the awards race (although last year's Oscar champ, The Hurt Locker, won last year's Best Feature award). 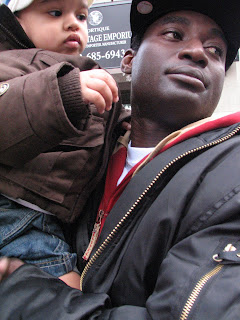 I was, however, thrilled to see that Prince of Broadway's Prince Adu (pictured left) received a nomination for Breakthrough Actor, an honor which he richly deserves. He gives perhaps my favorite performance so far this year in one of the year's best (and most overlooked) films.

The inclusion of Let Me In among the Best Feature nominations is a joke. I like the film, but to honor it after not having honored the superior Swedish film on which it is based in 2008 is, well, ludicrous.

Also, every Best Documentary winner has gone on to at least be nominated for an Oscar, although Inside Job is really the only one here with a shot. It's good to see The Oath and Sweetgrass listed among the nominees.

Best Film Not Playing at a Theater Near You: