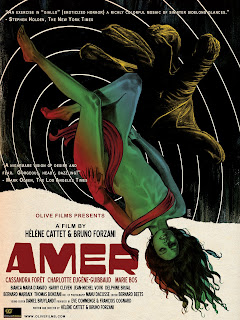 The first half hour of Hélène Cattet and Bruno Forzani's nearly wordless Amer is a brilliant exercise in gothic psychological horror - as a little girl named Ana deals with her own fear and fascination with death in the bowels of a dark, cavernous mansion as the corpse of her recently deceased grandfather lies upstairs. This opening sequence sets the stage for what will become a lifetime of darkness for Ana, and lay the groundwork for a series of psychological traumas that will haunt her for the rest of her life.

There is no real central narrative to speak of here, just a portrait of sexual repression and exploration as told in three stages of life - childhood, adolescence, and adulthood. Images that represent her repressed religious upbringing depicted in the first section (a black gloved hand, a pocket watch that resembles a rosary) carry over from one period to the next as her sexuality begins to manifest itself. In the middle section, Ana experiences being noticed by the opposite sex for the first time, an experience she finds both terrifying and tantalizing, until her mother punishes her, further enforcing her correlation of sex with violence. Desire is forbidden, and her body is a sacred place not to be touched.

By the time she reaches adulthood, sexuality has taken on a much darker hue. Having been brought up in such a repressive environment, Ana's sexuality begins to present itself in increasingly sinister ways. Her brief encounters with sexuality are liberating, purifying even, but their forbidden nature comes crashing through in moments of primal terror, as she finds herself pursued by dark figures that want to take advantage of her. It soon becomes clear, however, that the enemy she is running from is herself - manifestations of her own sexual fears and conflicted desires.

The title Amer means "bitter," which could easily refer to the bitter taste of forbidden fruit. Amer is a horror film, make no mistake, but in many ways it is a kind of horror of the mundane. There are no supernatural forces at work here, no psycho, knife-wielding killers on the loose - what scares Ana the most are things that for most people would be extremely commonplace. Ana's worst enemy is herself, the sexual repression imposed by a strict Catholic upbringing. Everything we see is happening inside Ana's head, whether it is literally through dream sequences or through visual, symbolic evocations of her innermost fears.

To take Amer literally would be a grievous mistake. It operates on a plane of surrealism not unlike Luis Buñuel, it even pays homage to him in an ant scene reminiscent of a similar shot in his infamous masterwork, Un Chien Andalou. However, unlike Buñuel, the surreal images mean something here. The filmmakers cite Italian Giallo crime films and the work of horror directors like Brian De Palma and Dario Argento as key influences, but it's also easy to see shades of other Italian directors such as Lucio Fulci present in the film. Cattet and Forzani have distilled Italian horror of the 1960s and 70s and filtered through the work of the early surrealists to create a fascinating work of post-modern avant-garde. It is a film of textures, moods, and feelings rather than plot, and since there is hardly any dialogue in the film, everything is conveyed through very specific use of imagery and sound. Although, since each segment of the film has a different tone, often feeling like three separate films, the film is unable to establish a consistent mood. It is often jarring and schizophrenic, frenetically edited and disorienting. Yet what at first appears to be one of its few disadvantages becomes one of its greatest advantages, setting the audience on edge and making the film an often uncomfortable viewing experience.