I was nervous. And why shouldn’t I be? Not only was this my first one on one interview, but I would also be interviewing Klaus Härö (Mother of Mine, The New Man), the director of one of my favorite films of the year, Letters to Father Jacob, in his very first interview in the United States. I had seen the film twice before back in April when it was at the River Run International Film Festival, but I wanted to make sure it was fresh in my memory, so before I was due to call Härö’s hotel I watched the film one more time, finishing it literally a minute before I placed the call to New York. 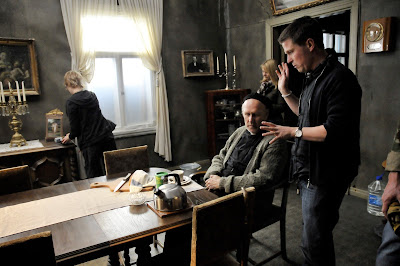 Klaus Haro on the set of LETTERS TO FATHER JACOB.

Seeing the film again reminded me of just how much it had spoken to me the first time, and its power hasn’t been diminished with subsequent viewings. It is truly a beautiful and timeless film, and its softspoken grace put me at ease.

My nervousness quickly faded after I placed the call. Härö is a kind and gracious man, well spoken and articulate despite suffering from a bout of the flu. Despite being sick and having just gotten off a transatlantic flight from Finland, Haro was energetic and upbeat, eager to discuss a film he clearly feels passionate about. And it’s easy to see why - since its debut Letters to Father Jacob has racked up award after award at various film festivals around the world, including the audience award for Best Narrative Feature at River Run here in North Carolina.

For his part, Härö had no idea the film would be so well received. In fact, it was a film he never meant to make at all. Before the screenplay landed on his doorstep, he was working on another film that was floundering. According to Härö, Finland’s film industry is very small, producing maybe 10 to 12 films a year, and without agents, things operate a little differently than your typical American production. The script for Father Jacob arrived uninvited, marked with only a title, a phone number, and a name - J. Makkonen (Jaana Makkonen, a social worker who wrote the original screenplay as a project for her diploma). He was at first offended that someone had presumed to send him a script without an invitation, but he was sick at the time and sick of reading the same newspaper over and over, decided to give it a read. By page 10 he was hooked and knew he had found something special, something “brilliant and classical.” He saw something in it he had never seen before, a film about faith with characters he recognized, not the typical one-note images of piety one would expect, and immediately pictured its two eventual stars, Kaarina Hazard and Heikki Nousiainen in the lead roles. He originally envisioned it as perhaps a small TV film, but it eventually grew into something more.

He speaks with great affection about both the film and the actors. He considers both Hazard and Nousiainen to be fine Finnish actors that he had always wanted to work with. He calls Nouiainen, who plays Father Jacob in the film, “the Henry Fonda of Finnish film,” a very masculine man with the ability to put that away to reveal great vulnerability. But he saves his most effusive praise for Hazard, who plays the film’s emotionally wounded ex-con with the rock hard exterior, Leila. Hazard, he says, who is not a trained actress, is not afraid to appear unattractive, and is a fearless actress who is not always pursuing the next part, her focus is totally on the here and now. 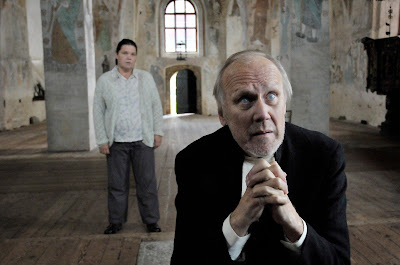 Kaarina Hazard as Leila and Heikki Nousiainen as Father Jacob in LETTERS TO FATHER JACOB.
An Olive Films release.

Härö speaks with a refreshing respect for directorial restraint. When I inquired about the film’s scant running time, and how it manages to feel like a complete emotional journey in just over an hour, he is quick to point out that he enjoys the purity of shortness, feeling that much energy is often wasted on too many subplots. Having learned to work with small budgets in the relatively tiny Finnish film industry, Härö emphasizes simplifying wherever possible, paring down the film until you define its emotional core. He compares film to a hot air balloon - it can’t fly until weight is lifted. He cites Chaplin and his ability to keep it simple as a major influence, as well as modern Chinese directors such as Zhang Yimou (Raise the Red Lantern, The Road Home).

When asked how the film affected his own beliefs or way of thinking, he says the opposite is true - while it allowed him to reflect on things he found important, it also allowed him convey a message he felt very strongly about. It is a film about faith as he knows it. He recalls very clearly growing up in a home where faith was not emphasized, only coming to it during his teenage years. He remembers how awkward it was as a child being around someone who was reading a Bible or praying, allowing him to put himself in Leila’s shoes as she is suddenly thrust into Father Jacob’s world. But now he is able to identify more with Jacob, and wanted to convey a very Finnish view of faith while evoking the feeling of Finland’s countryside that he remembers from the 1970s. The film is meant to reflect his own beliefs and where he stands now. It is about faith and human frailty, and he approached it with the question of “who am I when I am at my weakest? And who am I when I can no longer be of any use?” He believes there is a value in what we do. Modern Christianity is, to him, about having value even when you are weak, and Father Jacob embodies that notion without feeling heavy handed or preachy.

Coming from a family of Protestant ministers myself, I was struck by how true and honest the film’s depiction of the clergy is. It is never cloying or self righteous, and while we never discussed my own more secular beliefs, it was clear that Härö is neither pushy or sanctimonious with his views on religion. He is just as gentle and accepting as the film he directed, and it is easy to see just what a personal project it was for him.

While the American journey of Letters to Father Jacob is just beginning (it opens in New York City on Friday, October 8), Härö is already working on two new projects; one, entitled House of Hope, about a group of soldiers building a house for the widow of a fallen comrade, and another about the plight of Finnish Jews during WWII. Of course, if his newest film is any indication, things don’t always go as planned, and something else could fall out of the sky that demands his attention. Whether it was divine providence or a stroke of good luck, Letters to Father Jacob exists now for all to enjoy, and no matter what project Härö ends up tackling next, we can only hope it ends up as deeply powerful, and emotionally intimate, as this.

Letters to Father Jacob, an Olive Films release, opens Friday, October 8th, at the Cinema Village in NYC. It will open in Los Angeles on Friday, October 15, at the Laemmle Music Hall 3. Additional cities will follow.