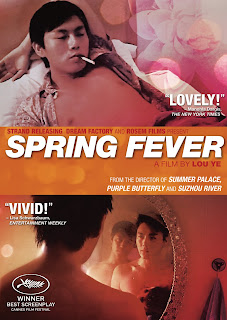 The plot of Lou Ye's Spring Fever sounds like something out of some sort of torrid soap opera. A woman who suspects her husband, Wang Ping, of infidelity hires Luo Haitao to follow him and report his findings back to her. When he discovers that Wang Ping is having an affair with a man named Jiang Cheng, she is devastated. But Luo soon finds himself drawn to Jiang, putting his relationship with his own girlfriend, Li Jing, in jeopardy. Soon, a strange love triangle forms between Luo, Jiang, and Li, as Li finds herself more and more in the back seat as Luo explores his newfound homosexuality.

Spring Fever is an observant and haunting exploration of sexual identity in China. Its intricate portrait of roving sexual alliances and games of "musical bedrooms" may occasionally be hard to keep up with, but Lou's tender direction creates such a memorable atmosphere that it's hard not to become lost in it. 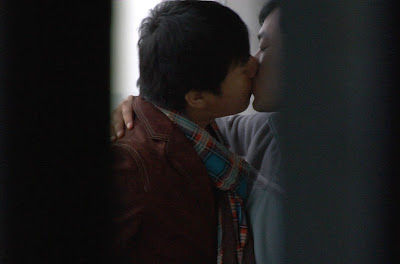 Lou obviously has a keen insight into human relationships, and in Spring Fever he demonstrates a great directorial restraint as well an almost painterly visual sensibility. The film deftly navigates its tricky emotional waters for a powerful and intimate examination of three men working through their forbidden desires, even while their homosexuality is almost treated as a non-issue. The fact that they are gay does not bother their female partners as much as the fact that they are cheating on them, and that is a very important distinction to make. In one of the film's most poignant moments, Li Jing takes Luo Haitao's hand and asks "is this how you hold hands?" wondering aloud what makes his relationship with Jiang different from what she can give him. She even goes so far as to cut her hair short to appear more boyish.

It is a heartbreaking scenario, and Lou handles it with supreme grace. It is a tale of people finding themselves, who don't yet know who they are, just trying to navigate their way through life and love. Male, female, it doesn't matter - each one is lonely and lost in their own way, and in Spring Fever they find a modicum of solace. Few other films this year have seemed so gut wrenchingly honest.