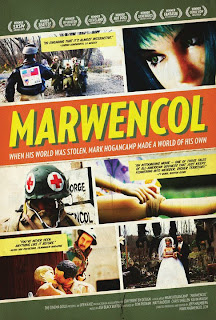 Documentaries about overcoming adversity through art have almost become a genre unto themselves. It has become a nearly hoary cliche, be it through art, dance, music, or theatre, how art brings people out of the darkness and gives them a new lease on life. There is a certain sense of having seen it all before, until a film like Jeff Malmberg's Marwencol comes along.

Marwencol is a completely disarming and utterly unique look at an artist who represents one of the most unusual and remarkable artistic discoveries of the decade.

Mark Hogancamp was attacked outside of a bar in April of 2000, and beaten within an inch of his life. He suffered severe brain damage which resulted in nearly complete memory loss, his former life erased as if it never existed. When he emerged from his 9 day coma he was a man without a past or an identity, and to the people who knew him he would never be the same. 40 days later he left the hospital a different man, with a clean slate on which to write a new and brighter future. 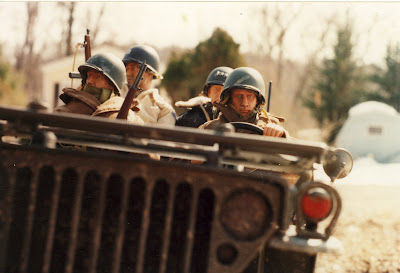 General Patton comes to Marwencol to inspect the troops.
Photo by Mark E. Hogancamp. Courtesy of The Cinema Guild.
Readjusting to life after his traumatic experience proved difficult, however, with his brain damage also impairing his social skills and ability to interact with others. So instead be begins to build his own town using dolls and models, a miniature World War II city in Belgium called Marwencol that is populated by people he knows. Through Marwencol he lives out an alternate life, with an alter-ego who is the dashing heroic figure he dreams of being. From everyday scenarios to clandestine intrigue to epic battles against the Nazi forces, Marwencol comes to life through Hogancamp's imagination, and he begins to document each storyline through an extensive series of photographs, never intending them for any other purpose than for his own benefit.

That is until he is discovered by someone who recognized the unique qualities of Hogancamp's art, and suddenly he finds himself thrust into the limelight, a shy, awkward man suddenly becoming an unwitting sensation. It is a remarkable story, a film about the transcendent power of art that is also a deeply observant and layered portrait of an extremely complex man. Malmberg isn't interested in a cloying rags to riches tale. What he found in Hogancamp is something much deeper. 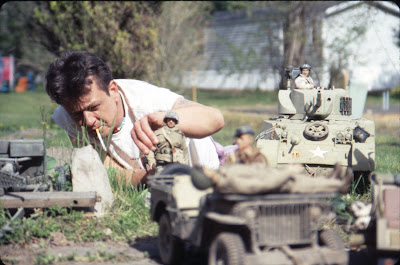 Mark Hogancamp sets up a scene in Marwencol.
Photo by Tom Putnam. Courtesy of The Cinema Guild.
More than just an example of the healing power of art, Marwencol dares to ask the question, "what is reality?" For Hogancamp, Marwencol is reality. His life is lived through his interactions with his fictional town, which in his head represents a world more real than the life he is leading. One can easily say that such a thing is unhealthy, but when looked at in the context of what he has overcome, suddenly it is shown in a completely different light. Malmberg wants us to look at Hogancamp from different angles as the man of many layers that he is, rather than judging him on face value. Whereas some would classify him as "odd" or "creepy" on first glance, Malmberg saw a man of many talents who had accomplished something extraordinary. Which is why for most of the film the reasons for the attack that left him with amnesia are left unknown. Malmberg withholds certain aspects of Hogancamp's life until later in the film, inviting the audience to get to know him and appreciate his work without judging him, but by hitting us with this information in the third act as some kind of shock, it almost unnecessarily sensationalizes it. But it's hard to fault Malmberg's intentions. Marwencol is meant to be a film that replaces judgment with understanding, and by the time Hogancamp's secret is revealed, the audience already feels a kind of kinship with him that supersedes any aspects of his life that some people may find off-putting.

In the end, Hogancamp is still something of an enigma. But that's kind of the point. How much can one person truly know another, especially someone as reserved as Hogancamp, whose personality is poured day after day into his art? Marwencol is a fascinating portrait of an artist who didn't even know he was one that challenges its audiences' notions of art and reality by confronting them with a man who refuses to be pigeonholed. Thankfully, Malmberg doesn't try, and the result is a truly compelling and insightful documentary.