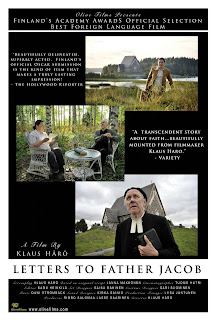 In perhaps the most striking image of Klaus Härö's Letters to Father Jacob, an elderly priest grips the sides of his podium before an empty church, seemingly forgotten by the world - pastor to a congregation that will never come.

It is in this moment that Härö brilliantly sums up the theme to his film in one heart-wrenching shot, telling us more about this character than pages of dialogue. This is Father Jacob (Heikki Nousiainen), blind, elderly, and past his prime, feeling useless and abandoned by the God he spent a lifetime in service to, left to wonder what his purpose is in a world that appears to longer need him. But this isn't really his story. The film is really about Leila (Kaarina Hazard), an ex-con who has just been released from prison after being given a mysterious pardon. With no job and nowhere to go, Leila is sent to live with Father Jacob in his secluded rectory in the Finnish countryside. Jacob is a widely beloved priest to whom devotees write a steady stream of letters asking for prayers on their behalf to help them through life's travails or trials of faith, and Jacob happily obliges, seeing this as an opportunity to extend his ministry and bless the less fortunate in the name of God. 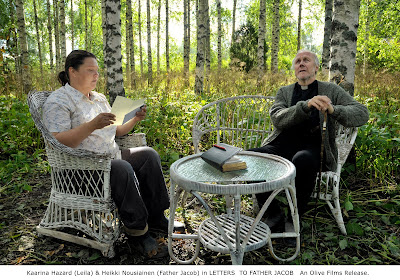 Father Jacob, however, is blind. And needs someone to read the letters for him and write out his responses, a job which Leila grudgingly accepts. Yet her heart remains closed, and she becomes increasingly irritated with Jacob's doddering ways, occasionally tossing letters down the well to lighten her work load. Then one day the letters stop coming, and Jacob is suddenly faced with a world in which he no longer knows his purpose. After devoting his entire life to doing the work of God by helping others with their problems, he no longer feels wanted or needed, and slips into a deep depression, desperately hoping to reclaim his purpose in life. Leila, on the other hand, just wants out, but both of them are about to discover something about themselves, and will find salvation in the most unlikely of places - each other.

Running a scant 74 minutes, Letters to Father Jacob is both short and sweet, a simple parable that manages to embody a complete emotional journey in just over an hour. It is a film without pretense or agenda, capable of reaching both religious and secular audiences, which is a testament to the power of Härö's graceful direction. Make no mistake, this is clearly a film about faith, and a deeply personal statement of belief on behalf of its director, but it is never pushy or sanctimonious. Instead it is a loving, warmhearted evocation of unconditional love, a film that is perhaps the closest embodiment of the teachings of the Biblical Jesus that I have ever seen, evoking a lovely gentility that is both spiritual and universal. Yet perhaps most importantly, it is one of the most strikingly true portrayals of the clergy that I have ever seen. While shrill hatemongers like Fred Phelps and Pat Robertson tend to dominate national attention, pastors like Father Jacob are often overlooked, and as such the film is something of a breath of fresh air. Härö neither judges or preaches, and instead allows the audience to find their own way through his tender narrative, finding the elements that most speak to them individually. 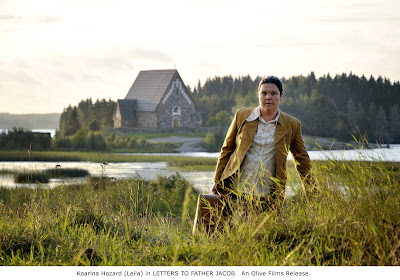 One need not be religious to appreciate the beauty of Letters to Father Jacob. It is, above all, a film about love, whether that love is embodied by faith, family, or something more. While its central conceit is a bit of a stretch (the letters just stop coming without warning rather than trickling down to nothing), it's hard to deny the film's simple power. Härö has an innate ability to convey so much with so little, something he has learned from years of working with low budgets in the Finnish film industry, and it pays off in spades. There is so much opportunity here for melodrama, but Haro keeps everything restrained and on track, from the remarkable performances to the hauntingly understated score by Dani Strömbäck.

While some might mistake its simple nature as simplistic, its brilliance is actually in its simplicity. After all, it is Father Jacob's simple faith that defines the film, and Härö clearly understands that less is more. The film makes its point quickly and efficiently, never overstaying its welcome, and in the process becomes one of the most deeply moving films I have seen in years. It is a small film that carries with it a profound emotional impact, and it does so with great subtlety, never manipulating the audience or reaching for the obvious. Härö treats his audience with great respect, and it shows in every gorgeous frame. What he has achieved here is truly stunning, Letters to Father Jacob is a deeply personal film with a universal message. Its themes may not be terribly complex, but its genius lies in the disarming power with which they are conveyed. It leaves an indelible impression, a searing an unforgettable evocation of one man's simple faith and compassion, that finds something of the divine in simple human kindness.