There are fewer filmmakers better suited to making a musical biopic than Baz Luhrmann (Moulin Rouge,  The Great Gatsby), so it's almost stunning that he hasn't really made one prior to now. While the genre certainly took a hit in the wake of Walk Hard, which mercilessly parodied its tropes, there has been no shortage of musical biopics in recent years, from the good (Rocketman) to the mediocre (Respect) to the abysmal (Bohemian Rhapsody). But Elvis just might be the best of the lot. 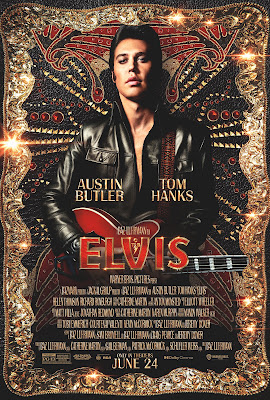 Luhrmann frames the story through the eyes of Colonel Tom Parker (Tom Hanks), Elvis' infamous manager whose underhanded dealings worked the king of rock like a mule to pay off his gambling debts. Parker is something of an unreliable narrator, using the story to try and justify his actions and push responsibility off on the audience, which creates a fascinating sense of tension between the audience and the narrator, while examining the culpability of the public in celebrity spirals. Hanks' bizarre performance caused quite a stir online from the brief glimpses in the film's trailer, but it actually works in context. Parker was a huckster, a sideshow carnie who made it big, and his biggest snowjob is on the audience, trying one last time to pull the wool over eyes.

If Hanks' Parker is a hurricane, then Austin Butler's Elvis is the calm in the middle of the storm. It's a vibrant, energetic, star-making performance that grounds the film amidst the absolute Luhrmann circus happening around him - and that combination of Luhmann's flashy directing and Butler's' inherent magnetism is the perfect metaphor for Elvis' life. Luhrmann mostly eschews with the typical bionic tropes by focusing on the music rather than the story beats - and with our unreliable narrator we're often left trying to piece together the truth on our own. In some ways it feels more like an impressionist portrait of Elvis than straight biography - and while there are certainly some familiar beats here, Luhrmann handles them with a flair that dusts them off and makes them feel bracing and new again.

It won't work for everyone, and that's OK. Many probably already know how much traction they will get out of a Baz Luhrmann picture, but for those willing to give themselves over to his vision, Elvis is a dazzling journey into Elvis the man and Elvis the phenomenon, dusting off his  now dated brand of Rock and Roll and making it feel fresh and vital -  taking the time to acknowledge its roots it black culture and the systemic racism that only allowed a white artist to rise to prominence with it. It's the best musical biopic in recent memory.