Horror has long been a creative outlet for filmmakers to explore horrific events and human trauma, grappling with their rippling effects in ways that make emotional and psychological pain become tangible. But in recent years, "it's actually about trauma" has become a kind of crutch, a way to signal to the audience that "this horror film is IMPORTANT" while avoiding being any fun. 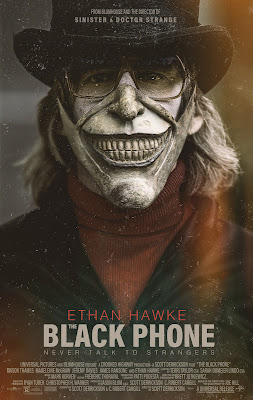 It's what has become colloquially known as "elevated horror," a term both insulting to horror films and to audiences in general, because you'll have a hard time convincing me that Scott Derrickson's The Black Phone is a lesser film than, say, Men, a film ostensibly about the horrors of misogynist violence that turned out...muddled, to say the least.

The Black Phone is a good, old fashioned serial killer movie with a supernatural twist, in which a young boy named Finney (Mason Thames) gets kidnapped by a ruthless serial killer known as the Grabber (Ethan Hawke), only to be given advice for survival from his previous young victims via a mysterious black phone in the killer's basement. It's an intriguing premise, and one feels like there's certainly room to explore it more than it is explored here, Derrickson certainly knows how to craft a jittery and unnerving atmosphere.

Similar in tone to Derrickson's own Sinister, the film has a kind of seedy energy, aided by its desaturated color palate, that almost makes it feel like an older film than it actually is. While not quite as as dark as Sinister, it manages to provide some genuine thrills and chills thanks to an eerie performance by Hawke and strong work by its young protagonists. Derrickson wisely takes his time introducing the main characters and acclimating us to their world. What has been criticized by some as slow pacing instead feels deliberate and earned. The film doesn't belabor explaining itself or its mythology. It's a lean, efficient thriller that comes by its scares honestly, doesn't patronize its audience, or try to be more than the sum of its parts. It's a well oiled thrill machine that feels like part of a dying breed.