Jordan Peele's third feature film as a director may appear on paper to be his most straightforward entertainment yet. Its allegories are less overt than Get Out and more specific than US, but Nope might be the strongest showcase yet for his keen storytelling skills. 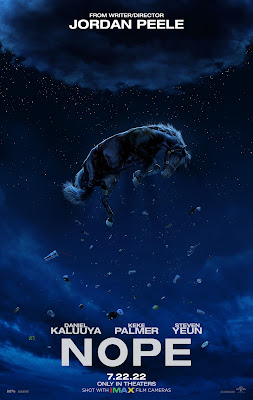 Post Get Out, audiences have come to expect Peele to use horror as a way to comment on real social issues - and he certainly does in Nope, but subverting expectations seems baked into the film's very core. Peele zigs when we expect him to zag, withholds when we expect him to show, and shows when we expect him to withhold. Here, more so than in any of his other films, Peele seems to display an almost Spielbergian sense of filmmaking instinct - knowing exactly where to place the camera, how to move it, and where to cut to achieve maximum impact.

That's why, perhaps, Nope seems to work in smaller, more self contained bits than as a whole - because Peele constructs some truly impressive set pieces here in this tale of a pair of sibling horse trainers (Daniel Kaluuya and Keke Palmer) who encounter a strange, unidentified object flying in the skies over their California ranch that steals their horses in the night. Determined to catch it in the act and sell the footage, the Haywoods decide to set a trap for the UFO, and instead discover something far more terrifying than they could have expected stalking the California skies.

Peele is the kind of filmmaker that has an innate instinct for the craft - think Spielberg or Shyamalan (and indeed, you'll see echoes of Jaws and Signs here) - carefully building tension and withholding just enough to keep the audience wanting just a bit more. Peele often suggests more than shows, aided by some truly stunning sound design, and it makes the horrific payoffs all the more satisfying. And of course, he's weaving a tapestry of themes throughout the narrative - exploring Hollywood's exploitation of animals and workers, along with our almost pathological need to document and profit off trauma. That Peele balances that thematic complexity so well with his keen storytelling skills is what keeps audiences coming back for more - and in Nope he takes a grand scale sci-fi premise, gives it a western twist, and turns it into something deeply unsettling (Steven Yuen's storyline about a child actor with a tragic past is a particularly unnerving subplot). And while certain sequences and elements feel more impactful than the film as a whole, it's an undeniably impressive achievement on nearly every level, cementing Peele's status as one of the most interesting mainstream American filmmakers working today.