In the battle of literary adaptations looking to pull women to the multiplexes this weekend (the other being Where the Crawdads Sing), Anthony Fabian's utterly delightful Mrs. Harris Goes to Paris is the clear winner. 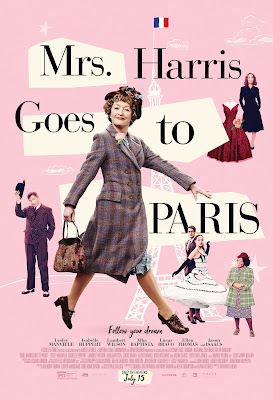 Lesley Manville stars as the titular Mrs. Harris, a kind hearted maid who spends much of her time taking care of others but never herself. When she comes into a bit of money thanks to a war widow's pension, she decides to head off to Paris to buy a Dior gown of her very own. She is met with resistance by the imperious manager (Isabelle Huppert) who would prefer to cater to their elite clientele, but she soon charms her way in and is soon a surrogate mother to a whole host of models, seamstresses, and Dior employees. She even finds herself under the wing of a wealth viscount who is taken in by her guileless spirit. But as always, she also finds herself selflessly taking care of every9one around her and forgetting to take care of herself - but she will soon find that following her dreams will make her friends she could have never imagined. She goes to Paris in hopes of finding something beautiful, and instead brings something beautiful to them.

Mrs. Harris Goes to Paris has a very specific aesthetic reminiscent of early/mid-2000s mid-budget films released by speciality arthouse labels from places like Miramax and Focus - Mrs. Henderson Presents, Being Julia, Miss Pettigrew Lives for a Day. Mrs. Palfrey at the Claremont...stories about women of a certain age rekindling their love of life through unusual circumstances. Anchored by a strong turn by Lesley Manville, Mrs. Harris Goes to Paris is a beguiling bonbon of a movie - a modest crowd pleaser with a heart a mile wide.

It may hit familiar beats, but it does so with an elegant twinkle that makes it hard to resist. Manville is clearly having a blast in a mirror universe version of her character from Phantom Thread, surrounded by gorgeous gowns a sumptuous period design that slyly undercuts the Parisian mystique. It's a captivating throwback that feels like being wrapped up in a warm and cozy blanket - one of the summer's most unexpected delights.