"By the pricking of my thumbs,
Something wicked this way comes."
Macbeth, Act IV, Scene I.

Macbeth has long been my favorite Shakespeare play - a gothic fable about a power hungry noble driven mad by paranoia after killing his cousin, the king, and ascending to the throne at the urging of his far more cunning wife - Macbeth has it all; witches, murder, palace intrigue, all set against the desolate Scottish moors and the mist shrouded parapets of ancient castles. 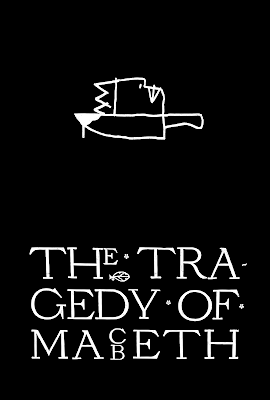 Not only is Macbeth my favorite Shakespeare, German Expressionism is also my favorite film movement. It is a pleasure, then, to see how well Joel Coen "understood the assignment," as the memes say, turning Shakespeare's cursed "Scottish play" into a modern piece of German Expressionism, as if the very souls of F.W. Murnau, Fritz Lang, and Robert Wiene themselves were guiding his hand. Few films that try to emulate the look and feel of the silent era ever really get it right, but Coen's The Tragedy of Macbeth comes pretty damn close - and it's not just because of the black and white cinematography and 1.33:1 aspect ratio. The elongated shadows, the exaggerated sets that somehow feel both intentionally artificial and off-kilter, everything just a little too big or a little too small, to the understated score by Carter Burwell, all of it adds up to create something singularly eerie and unsettling.

German Expressionism often used off kilter sets and aberrant angles to suggest its characters' mental and emotional state, and Coen uses that to similar effect here, as Macbeth (Denzel Washington) and his queen, Lady Macbeth (Frances McDormand) descend into paranoia and madness as their enemies close in around them. I've often said that while Shakespeare may be intimidating to those who are unfamiliar with cadences and subtleties of the language, it isn't so difficult to understand if the actors and the director know what they're saying and how to convey it. Washington and McDormand are tremendous, but the supporting cast really rises to the occasion, breathing new life into Shakespeare's words in ways that feel thrillingly modern.

Standouts include Kathryn Hunter, truly frightening as the witches, Brendan Gleeson as  Duncan, and Dudley Dursley himself, Harry Melling, as Malcolm - showing off that British acting training in ways he's never truly gotten to exercise to this degree before. The cast manages to both ground the lofty language and revel in its poetry - walking a delicate line between making it palatable to expectations of modern acting styles and also accentuating its unique rhythms. And while it can often feel quite cold, Coen's keen eye and Bruno Delbonnel's jaw-dropping cinematography help transport us into a world that at once feels alien and timeless, bound to its theatrical roots and yet boldly cinematic, eschewing realism for a world of expressionistic nightmares that bring the madness of king Macbeth to terrifying life. Its like nothing Coen has done before (Joel Coen, working for the first time without the collaboration of his brother, Ethan), and yet it still manages to capture that indelible Coenesque spark, finding the humor and playfulness in Shakespeare's verse. The Tragedy of Macbeth is one of the best Shakespeare adaptations in many a moon - it's an oft told, familiar tale, but Coen makes it once again feel as vibrant and vital as ever, a hushed and ghostly tale of absolute power corrupting absolutely, without losing sight of the inherent human folly at its core.