Originally slated for release in January of 2021, Simon Kinberg's The 355 was delayed almost exactly one year due to the COVID-19 pandemic, finally arriving in theaters to little fanfare as the first new wide release of 2022. 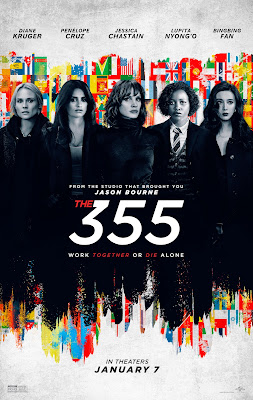 While January is often seen as a dumping ground for films studios don't have much faith in, COVID has somewhat upended traditional studio release patterns. Still, The 355 is a January release through and through, a barely there spy thriller that completely misuses its impressive cast in service of a dull and borderline nonsensical narrative that's nearly as silly as its title. The film stars Jessica Chastain as a CIA agent who suddenly finds herself embroiled in International intrigue when a mission goes south and sends her on a quest to avenge her fallen partner and save the world from a shadowy threat who seeks a high tech gadget that can hack any closed network in wants.

So she recruits agents from spy agencies around the world, Germany (Diane Kruger), Colombia (Penélope Cruz), the UK (Lupita Nyong'o), and China (Fan Bingbing) in an effort to stop the device from falling into the wrong hands. Along the way they uncover a vast international conspiracy involving double and triple agents, until they are no longer sure who they can trust. It's all very generic stuff, and Kinberg's direction does the material no favors. The action sequences are lackluster and disorienting, and even though I'm not one to nitpick "plot holes," The 355 defies logic so many times that it's almost impossible to take seriously. Movies like this don't have to be realistic, but they should at least adhere to their own internal logic. THE 355, unfortunately, never does, playing instead like a spy thriller written by people really don't know that much about espionage but have seen a lot of spy movies.

The titular heroines, all supposedly clandestine super spies whose identities aren't even known to other intelligence agencies, are constantly running around in public, guns drawn, without anyone seeming to notice, and Chastain especially almost seems uncomfortable wielding a gun. Cruz is best in show, playing an agency psychologist who's very out of her element in the field and just wants to go home - a sentiment with which I greatly identified while watching this film.

In the end, The 355 is mostly a collection of spy movie tropes with a CIA girl boss sheen. While it's a common trope, one scene in particular felt especially egregious, when Chastain's character waxes nostalgic about the good old days when "we knew who our enemies were," then mentions the Cold War and the War on Terror as times she wishes we could return to. While even James Bond expresses a similar sentient in No Time to Die, never has in been so specifically tagged to those two egregious moments in American history, and one wonders why the screenplay by Kinberg, Bek Smith, and playwright Theresa Rebeck decided to call out those two "wars" by name.

Even without the barely disguised American war crime apologia, The 355 is not a particularly good movie. It's a mishmash of tropes that attempts to make American imperialism seem more palatable by centering an international team of women secret agents, but at no point does it interrogate the political implications of its mostly nonsensical story. It could have very easily upended or subverted those tropes, but even when the system shows its true colors, the characters still seem to believe in its inherent goodness. But it's hard take any of it seriously when it's obvious how little thought went into this. Even if we weren't in the middle of a pandemic, The 355 feels like a film destined to be forgotten, relegated to late night showings on basic cable, while the cast (without exception better than the material they're given) moves on to bigger and better things.