Like the burning sun that provides the backdrop for its marketing (not to mention the dance performances at its heart), the title character of Pablo Larrain's Ema is an expanding star, destined to swallow up all who come too close in a fiery burst. Ema (Mariana Di Girolamo) is a dancer, her husband Gastón (Gael García Bernal) is a choreographer; together they adopt a child to seemingly complete their life, only to find him violent and antagonistic (a more literal pyromaniac than Ema's figurative one), and they make the decision to return him to the adoption agency and move on with their lives. 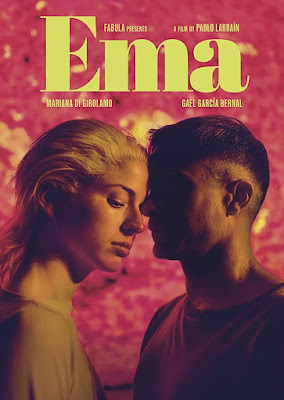 Only they cannot move on with their lives - not only haunted by their abandonment of young Polo (Cristián Suárez) but by the nagging questions of what their lives could have been had they kept him. Their decision to renounce their parenthood sends shockwaves through their tight-knight community and turns them into social and professional pariahs. Ema, ultimately, regrets their decision, but is barred from seeing Polo for fear it may further destabilize the child's life. Realizing that a nurturing family is what Polo needs, Ema takes matters into her own hands, manipulating those around her like chess pieces to put herself back in his life forever.

Ema is, in some ways, like a reimagined Fatal Attraction, but instead of seeking to harm the object of her affection she seeks to protect him, to reclaim her motherhood, no matter the cost. Ema is ultimately about woman reclaiming her agency, refusing to be choreographed by her husband anymore; but she, like her husband, is a profoundly toxic person, borne of toxic energy and flowered in conflict - if she can reclaim Polo, she believes, she can reclaim her life and save this child from the ongoing cycle of trauma. But in order to do so, she's going to have to hurt a few people and destroy a few families in the process in order to forge something new from the fire. But is she breaking the cycle? Or merely beginning a new one?

It's a fascinating work, perfectly at home with Larrain's fascination with broken humanity that has been the focus of films such as Jackie, Neruda, and Spencer. But rather than using a historical figure as a jumping off point for his thematic musings, Ema is purely fictional, freeing Larrain in ways that feel bracing and new, and the creative energy here seems ready to burst of the screen at any moment. Larrain often frames the action through the lens of Ema's dance performances, creating something at once moody and hypnotic, enhancing Ema's view of life as a performance that simultaneously hides and expresses her true emotional turmoil. It's a dazzling emotional high wire act, a vibrantly burning ember that burns slowly and deliberately before revealing its true beauty in a moment of blinding clarity. It's tricky emotional territory and Larrain navigates it beautifully, allowing his broken heroine agency without endorsing or condemning her morally questionable methods. There's something deeply feminist at play here that allows Ema to be messy and amoral, a free agent of her own fate, neither lionized or vilified. For good or ill, her choices are her own, refusing to conform to the societal pressures and standards that constantly try to dim her light. It is, perhaps, Larrain's most formally daring work - overlooked, perhaps, in the shadow of Spencer's near simultaneous release stateside, but just as mysterious and unknowable - a veritable knockout that burns just as brightly and fearfully as its wounded protagonist.