Originally slated for release in October of 2019, Joe Wright's The Woman in the Window was lost in the shuffle of Disney's acquisition of 20th Century Fox, before finally being sold off to Netflix to be unceremoniously dumped on the streaming service this past week, nearly three years after completion of principal photography. 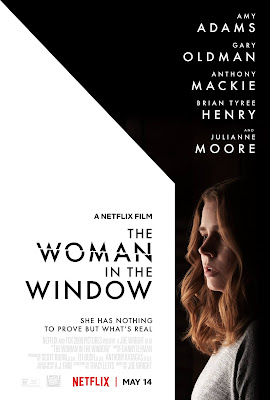 Based on the best-selling 2018 novel by A.J. Finn, The Woman in the Window tells the story of an agoraphobic psychologist named Anna Fox (Amy Adams) who believes she witnessed a murder in the apartment across from hers. After reporting the murder to police, she is told not only did the murder never happen, but that the woman she believes she saw killed never existed, causing her to question her own reality and finally face the trauma of her past. The story borrows heavily from Alfred Hitchcock's Rear Window, along with films like Steven Soderbergh's Unsane and other contemporary book club book club selections like The Girl on the Train. Protagonists questioning their own sanity is nothing new, and The Woman in the Window brings nothing new to the table, taking it's pulpy source material and failing to find anything  particularly interesting within its pages, despite a screenplay by Tracy Letts.

Adams is in fine form but the script does her no favors, the expository dialogue working overtime to flesh out the novel's intricacies. It's certainly beautiful to look at. Director Joe Wright (Atonement) and cinematographer Bruno Delbonnel (Amélie) shoot the film like a Douglas Sirk melodrama, but you'll find none of Sirk's abilities to translate soap opera trappings into trenchant social commentary. By the time the film reaches its wild conclusion, it feels like it has gone completely off the rails, with its monologuing villain and hyperactive violence that is so cartoonish that it seems completely at odds with the rest of the film.

For a film about internalized trauma it certainly explains itself in the most blunt fashion, relying on ludicrous plot contrivances and coincidences to drive the action forward. Adams, and indeed Wright, seem completely  lost as to how to tackle the material, whether to play it straight or embrace its trashy aesthetic. It's a fine line that has been walked to much greater success before (think David Fincher's Gone Girl or The Girl with the Dragon Tattoo), but here it the result is listless and deeply uninterested in the story it's trying to tell. It's not the epic disaster that it's reputation suggests, it's just a dreary and uninspired thriller will likely be quickly forgotten.