There are few filmmakers who could juggle so many genres, not just in their careers but in a single film, with such grace as Frank Borzage. Borzage, who won the very first Academy Award for Best Director in 1929 for 7th Heaven (and again in 1932 for Bad Girl) had a reputation for making incisive love stories. An eternal optimist, Borzage was the kind of filmmaker who believed deeply in true love, and managed to convey that on screen without an ounce of sentimentality. Love certainly conquers all in Borzage's films, but he displayed a keen understanding that it wasn't always an easy road. 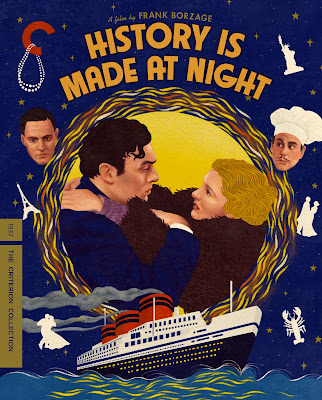 History is Made at Night is a strange animal - it's a love story, a melodrama, a comedy, and a disaster picture picture all rolled into one, featuring tonal  shifts that would have given the audience whiplash in the hands of a less capable director. There's a certain bliss to going into this film blind, experiencing its unusual pleasures organically and with no expectations, because what Borzage achieves here is nothing short of wizardry. It begins with socialite Irene Vail (Jean Arthur) leaving her possessive husband, a shipping magnate named Bruce (Colin Clive), who sends his goons to frame her for infidelity so he can stop the divorce and force her to remain with him. She is rescued, however, by a passerby named Paul Dumond (Charles Boyer), the headwaiter of a local restaurant in Paris. The two form an almost instant bond, one that Bruce becomes determined to break at all costs, including committing a murder and framing Paul. Eventually reunited in America, Paul and Irene become determined to set things right and live happily ever after, that is until Bruce conspires to sink his own ship on its maiden voyage in order to send the couple down with it.

It's such a wildly unlikely scenario that could only happen in Hollywood, but Borzage handles it with such charm and wit. Boyer and Arthur are a magnetic pair, and Leo Carrillo provides memorable comic relief as Paul's boss and best friend, the world-renowned chef, The Great Cesare. Yet perhaps the standout here is Clive, Dr. Frankenstein himself, in one off his final performances. Clive, suffering from alcoholism and mere months away from his untimely death from tuberculosis and pneumonia at the age of 37, is terrifyingly intense here as the jilted, jealous husband, who is himself an alcoholic. It's an almost painful performance to watch in hindsight, but Clive is tremendous here, displaying a towering talent cut down far too soon.

That Borzage was able to juggle so many disparate elements into such an endearing picture is a testament to his skill as a filmmaker. History is Made at Night takes high drama to nearly ridiculous heights (a jilted ex-husband ordering a steam ship captain to go into an ice field at top speed in hopes of sinking the ship to kill his ex-wife and her new beau is the very definition of "extra"), but by God this thing works, and not only merely works, it works like gangbusters. It lays out a kind of epic romantic template that would be followed by James Cameron in Titanic decades later (there's no way Billy Zane's Caledon Hockey wasn't inspired at least in part by Clive's Bruce Vail). It grounds its wild plot with endearing characters, charming comic relief, and a deep and abiding belief in the power of love to conquer all. You'll find no cynicism or irony here, Borzage plays it 100% straight, and the result is something quietly enchanting, a guileless and wide-eyed paean to romance whose innocence never feels in any way cloying - it's just pure classical Hollywood magic.

HISTORY IS MADE AT NIGHT | Directed by Frank Borzage | Stars Charles Boyer, Jean Arthur, Leo Carrillo, Colin Clive | Not Rated | Now available on Blu-Ray and DVD from The Criterion Collection.