In 1932, Dorothy Arzner was the only woman directing films within the Hollywood studio system. While her none of her films were ever major hits, and many have been forgotten in the decades since, they are nonetheless responsible for launching the careers of such legendary actresses as Clara Bow (Get Your Man), Katherine Hepburn (Christopher Strong), and Lucille Ball (Dance, Girl, Dance), while bringing a much needed feminist perspective to the studio system that was lacking in many films of the period. 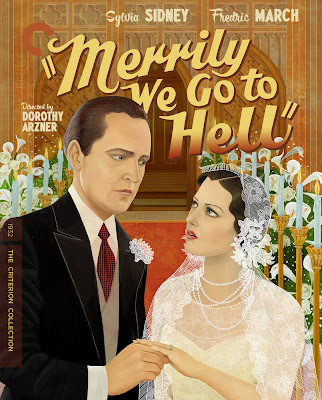 1932's Merrily We Go to Hell was Arzner's fourth collaboration with actor Frederic March, here gamely playing the part of Jerry Corbett, an aspiring playwright whose reliance on alcohol constantly threatens to sink him and everyone around him. Sylvia Sidney is Joan Prentice, an heiress who falls in love with him and gives up everything to be with him, even though he disappoints her at nearly every turn, often showing up late to functions, showing up drunk, or not showing up at all. Joan believes in Jerry when no one else does, wanting nothing in return but to hear the words "I love you" ("gee, you're swell" is all he can ever muster), and in turn Jerry slips back into his hard drinking ways, pining for an actress who once broke his heart.

Fearing she will lose Jerry forever, Joan agrees to letting him see his one time lover (Adrianne Allen) on the side, an experiment in open marriage that ends disastrously and threatens to bring Joan's world crashing down around her. It seems that no matter how much time, love, and energy she invests in Jerry, he is simply unable to make even the most minimal effort for anyone other than himself.

Merrily We Go to Hell grapples with themes of alcoholism and infidelity in ways that are surprisingly frank for the time, even in pre-code era Hollywood. Arzner deftly illustrates the sacrifices that women were often forced to make in the decidedly patriarchal ideals of marriage (many of which still endure today), where the men are given leeway to do whatever their heart desires, while the women were expected to be good little housewives who support him no matter what. Merrily We Go to Hell takes that idea to its logical extreme, and the result is often hard to watch, as Jerry's self-destruction coupled with Joan's selfless devotion becomes nearly unbearable. Naturally, it paints in bold strokes to make its point, going from romantic comedy to tragedy in the span of 83 minutes, but its emotional core rings true. It's a bruising film, made even more so by Sidney and March's devastatingly truthful performances, skewering society's skewed gender standards and expectations for a "happy" marriage. It's clear where Arzner's sympathies lie, and for a society that continues to value the perspectives of men, Merrily We Go to Hell feels like an uncompromising punch in the gut in ways that will likely feel revelatory to men, and all-too-real to women.