Coming off a string of film noir detective joints like T-Men (1947) and He Walked by Night (1948), Anthony Mann turned his attention to the Western genre, beginning a string of films that would carry him through the 1950s and ultimately come to define his career. The Furies was the third film Mann directed in 1950, after Side Street and arguably his most popular western, Winchester '73, starring James Stewart. It's certainly an unusual entry in the genre - more in line with revisionist westerns like Samuel Fuller's Forty Guns (also starring Barbara Stanwyck) from later in the decade than anything else at the time. 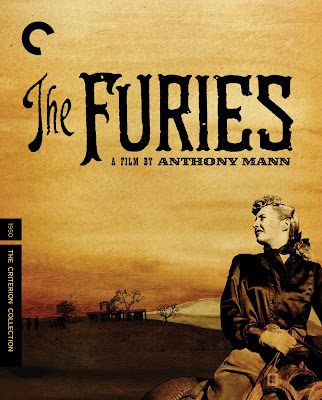 The Furies is, first and foremost, a melodrama and a romance, its western trappings (taken from the 1948 novel by Niven Busch), almost coming across like window dressing. The film centers around Vance Jeffords (Stanwyck), tempestuous daughter of cattle baron T.C. Jeffords (Walter Huston, in his final performance). Willful and spoiled, Jeffords all bun runs her father's expansive ranch, The Furies, as her father fends off squatters and creditors by issuing worthless "TCs" as a kind of IOU. Deeply in debt and facing foreclosure, T.C. is faced with either doing business with Rip Darrow (Wendell Corey) the son of his mortal enemy who has eyes for Vance (or is it her father's ranch?) or watching his mighty empire crumble to dust. Vance is likewise torn between two men, handsome Mexican homesteader, Juan Herrera (Gilbert Roland), whose family has been squatting on the Furies, and a love/hate relationship with Darrow. But when T.C. brings home a wealthy woman (Judith Anderson) with an eye for marriage, Vance feels her position as her father's favorite threatened, and begins to conspire to win the Furies for herself, by any means necessary.

Mann brilliantly centers two deeply flawed characters at the story's center, even hinting at a possible incestuous relationship between Vance and T.C. But T.C.'s abuses eventually become too much to ignore, as he violently throws the squatters off his land, cruelly targeting the Harrera family in order to take revenge on Vance. The Furies was a continuation of Mann's fascination with Shakespeare's King Lear, with T.C. the clear Lear figure, a lion in winter whose waning power is threatened once the sharks sense weakness and begin to circle. For much of its runtime, The Furies is a brutal tale of intergenerational struggle for power, the Furies becoming a deeply corrupting influence on all who seek to control them. Curiously, Mann undoes much of the moral ambiguity in the final act which ties things up too neatly and retroactively lionizes T.C. in a truly bizarre way that seems totally incongruous to not only the character, but to the film's view of him up to that point. It almost feels like a studio mandated happy ending that just does not fit, and it undermines the integrity of the film in troubling ways.

The result is a deeply unusual film, one filled with fire and fury that curiously pulls its punches at the last minute, displaying Mann's gritty sensibilities in striking ways while sacrificing its carefully crafted themes in a misguided attempt at a happy ending. Existing in a dark moral gray area for much of its runtime, The Furies ultimately ends up with a pat Hollywood ending that leaves what could have been a western masterpiece as a strangely unsatisfying "what if?" There are so many things to love here - Stanwyck's fiery performance, Huston's jovial menace, Judith Anderson's layered performance as the sympathetic would-be usurper of Vance's crown, Victor Milner's striking, Oscar nominated cinematography; taken together these elements push The Furies to near greatness, only to stop just short. Mann would continue to tinker with his ultimate paean to King Lear in films like The Man from Laramie (1955) and Man of the West (1958), and in a project called The King, that never came to fruition. But The Furies remains a fascinating entry in the Western genre; flawed, powerful, and haunting, a meditation on the all-encompassing corruption of capitalism that, in perhaps the most American fashion, ends up paying tribute to the very figures it set out to condemn.