Written and directed by Billy Crystal, Here Today stars the venerable comedian as an aging comedy writer named Charlie Berns who is privately facing the onset of dementia. 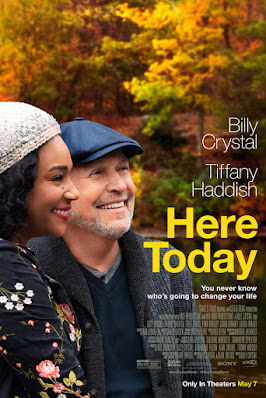 Facing not only the loss of his career but the memories of late wife, Charlie sets about to write a memoir of his life in order to preserve them, but the pressures of his job and his rapidly progressing condition make it difficult for him to work. That is until he meets Emma Payge (Tiffany Haddish) in one of those "win a date with a celebrity" auctions, and what begins as a minor annoyance soon becomes an unlikely friendship that will change them both.

While not as long as his career in front of the camera, Crystal's career as a director is long is not particularly prolific - Here Today is only his 4th film since 1992. And while there's nothing groundbreaking here, it's a pleasantly inoffensive "opposites attract" buddy comedy with a decidedly schmaltzy tinge. For a film about a comedy writer, its surprisingly light on laughs (even during the SNL-esque comedic segments that are genuinely supposed to be funny), and for most of the running time the film has difficulty balancing its comedic elements with its more serious themes. Still, Crystal and Haddish make for a fine pairing even when working with such thin material, and their friendship really gives the film a lot of heart. It may tread familiar beats, but it packs a surprising emotional punch thanks to an unexpectedly nuanced performance by Crystal, who conveys a great range of pain masked by a funny man's persona. His rapport with Haddish holds the film together even when the script can't quite support emotions its trying to convey. By the end, Here Today seems to fit like an old glove; well-used but warm, familiar, and comforting, filled with celebrity cameos and nostalgic references. Even when it threatens to veer into schmaltz, overplaying its hand in ways that occasionally feel forced, the balance of old school and new school comedy represented by Crystal and Haddish makes for a pleasing combination, even if Haddish feels somewhat trapped by a script that doesn't quite seem to know what to do with her particular talents.