Originally released in 2016 but only now finding its way to the United States, Hong Sangsoo's Yourself and Yours takes the filmmaker's fascination with fractured storylines and reshapes it to focus on characters rather than events. The film centers around a painter named Youngsoo (Kim Joo-hyuk) who becomes jealous after hearing that his girlfriend, Minjung (Lee Yoo-young), was seen out having drinks with another man. They break up, but when one of Youngsoo's friends confronts her later in a restaurant, the young woman claims not to be Minjung at all, but her twin sister. 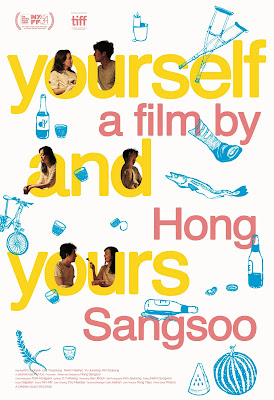 This sets off a series of events in which Minjung and the mysterious young woman are mistaken for each other, leaving the audience to wonder if Minjung really has a twin, or if she is somehow dissociating from her traumatic experiences. Both women genuinely seem to have no recollection of meetings or conversations held by the other. Does Minjung really have a twin? Or is something else going on here?

Hong never focuses on the mystery - whether or not Minjung has a twin or if it's actually her all along isn't really the point (although it should be noted that the mysterious twin sister is never given a name), what interests him instead is how the ambiguity around her character affects how she is perceived by the audience. Since we don't know who she is at any given moment (or if she is even two different people at all), we begin to focus on how she is responding to events.

Rather than a fractured, elliptical narrative, Yourself and Yours hinges on a fractured, elliptical character; a woman struggling to overcome addiction and alcoholism, who is trying desperately to become a better person. In essence she really is two different people, and Hong deftly explores her attempts to reconcile her past with the future she wants to create. It's one of Hong's most lovingly nuanced works, a film filled with longing and regret that finds great beauty in the in-between moments, the lingering glances and subtle changes in expression that exist between the deceptively mundane dialogue and jaunty score.

Coming on the heels of Right Now, Wrong Then (2015), Yourself and Yours finds Hong in a transitional period, when the filmmaker was grappling with a very public divorce following his affair with actress Kim Minhee during the filming of Right Now, Wrong Then (an event that would greatly inform his next three films - On the Beach at Night Alone, Claire's Camera, and The Day After). There's something deeply wistful about the way in which it deals with being in a relationship with someone you no longer feel like you know - almost as if they're a completely different person. Yet Hong consistently refuses to tip the scales in favor of either Youngsoo or Minjung, instead striving for a palpable sense of empathy for both characters, each attempting to reconcile their own newfound sense of uncertainty with something akin to grace.