There are few filmmakers whose filmographies feel as tailor made for our moment in history as Spike Lee's. From Do the Right Thing to Bamboozled to BlacKkKlansman, Lee's films are filled with a sense of urgency and righteous anger that continues to be relevant even decades after their release. Take, for instance, his 1989 masterpiece Do the Right Thing, a slice-of-life look at simmering racial tensions in a Brooklyn neighborhood on a sweltering summer day that culminates in the murder of an unarmed black man by the police. It's a shattering film, one that, tragically, hasn't aged a day, featuring themes so up-to-the-minute it could have been released this week and been every bit as essential and vibrant as it was thirty years ago. 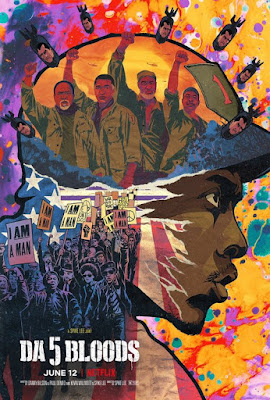 The arrival of a new Spike Lee joint in the midst of massive national upheaval born out of yet another murder of an unarmed black man by police officers seems somehow providential, a necessary artistic reminder of the violence waged against black bodies by the government of the United States of America. Da 5 Bloods, now streaming exclusively on Netflix, is Lee's take on the Vietnam War, centering around four black veterans who return to the Jungles of Vietnam nearly 50 years after their original tour to retrieve the body of a fallen comrade.

But the body of Stormin' Norman (Chadwick Boseman) is ultimately just a pretense - the real reason for the pilgrimage of the surviving five "bloods" is a buried treasure of gold bars they were once tasked with retrieving for the US government, but instead made a pact to bury it and return one day to use the gold as reparations for centuries of slavery and institutional oppression. Retrieving their lost gold isn't as easy as they thought, however, as they are forced to reckon with the still-painful legacy of America's intervention in Vietnam, and the use of black soldiers as an arm of American imperialism while the government continues to perpetuate institutional racism against black people at home.

Da 5 Bloods is a blistering homage to films like Francis Ford Coppola's Apocalypse Now and John Huston's The Treasure of the Sierra Madre, allowing Lee to use the language of quintessentially American genres like the Vietnam war film and the western as a tool for critique of American sacred cows. Lee cuts through the haze of false patriotism to examine not only the war's legacy in Vietnam but on its legacy of trauma for the black soldiers who were sent to fight in the name of a country that cared little for them, fighting a lost cause for no reward and little gratitude. The mission at the heart of Da 5 Bloods is an attempt to reclaim agency, but it runs afoul of the dark and tangled legacy of American imperialism. The film is ultimately a descent into madness with the corrupting power of money at its center, mirroring mounting paranoia of Sierra Madre and the creeping insanity of Apocalypse Now.

Nowhere is this transformation more indelibly realized than in the performance of Delroy Lindo as Paul, a Trump-supporting veteran whose desire to atone for the sins of the past is as strong as his desire for personal gain - his refusal to reckon with the real legacy of the war driving him to a kind of madness that recalls Marlon Brando's searing performance in Apocalypse Now. And yet Lee, despite clearly holding political views that are diametrically opposed to the MAGA positions of Lindo's Paul, refuses to judge the characters. Instead, Paul is another piece of the tragic tapestry woven in the aftermath of the Vietnam war, and you can feel Lee grappling with its calamitous effects both for the black community and for the soul of the nation as a whole. It's not only a powerful, elegiac tribute for the black soldiers who served in Vietnam, but a haunting and complex examination of the war's dark legacy, both for America and for people of Vietnam.

Arriving right now, in this moment, with reparations at long last becoming a mainstream idea, with the legacy of systemic racism and America's complicity in its perpetuation coming to the fore, Da 5 Bloods feels like a necessary lightning rod. It may not be the kind of film that changes hearts and minds, but its examination of the Vietnam war (and American cinema) through a modern lens puts the conflict in a fresh perspective that feels fundamental to our current era in time, reminding us all that the current unrest didn't happen in a vacuum - but is part of a greater system of injustice that has been mounting for centuries.