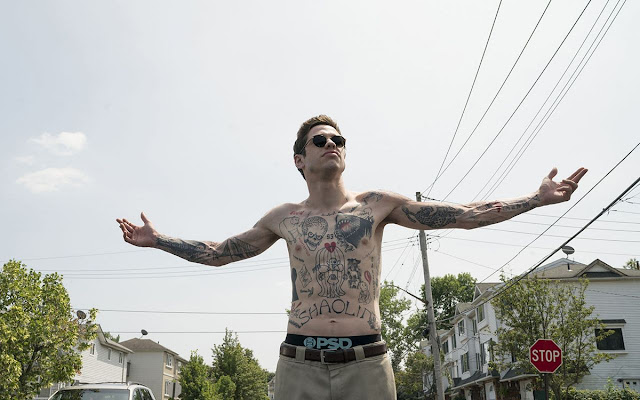 In his six years as a cast member on Saturday Night Live, Pete Davidson has often been one of its most divisive figures. His very public struggle with mental illness has shone a light on important issues alongside a few tabloid-fodder romances and controversial jokes. His uneven and often irregular appearances on the show have given the impression that Davidson is somewhat difficult, and yet the producers and the cast have admirably stuck by him through thick and then. 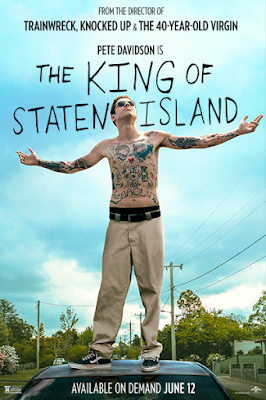 So the fact that Davidson is at the center of a new film from Judd Apatow (The 40-Year-Old Vigin, Knocked Up) was met with some incredulity from those who were already skeptical of his work. But The King of Staten Island bears little resemblance to Davidson's sometimes scattershot appearances on SNL. In fact, it often feels like an exorcism, a semi-autobiographical therapy session designed to put Davidson's checkered past behind him. "The movie is like my love letter to my mom and trying to end that part of my life." Davidson said in a recent interview. And indeed, “The King of Staten Island” imagines an alternate world in which Davidson doesn't discover comedy while paying tribute to those people that shaped his life.

Davidson stars as Scott, a twenty-something aspiring tattoo artist from Staten Island who is drifting through life, a constantly burden to his harried mother (Marisa Tomei), mostly content to sit around, smoke pot, and play video games while the world by without him. His father was a firefighter who died in a fire years earlier (Davidson's real-life father was a firefighter who died on 9/11), and Scott has grown to resent that he didn't get to grow up with his father present. But when his mother starts dating another firefighter, Scott is forced to confront his demons and the years of pent up anger that have led to his aimless lifestyle, with its broken relationships and fleeting connections, and at long last seek a more fulfilling life.

The King of Staten Island is perhaps one of Apatow's most mature and accomplished works, more in the vein of Funny People and This is 40 than Trainwreck or Knocked Up. It's funny of course, but there's a sense of wistful melancholy at work here that really sets it apart. Apatow creates a fully realized, lived-in world of slackers and everyday heroes, paying tribute to the unsung working-class heroes like firefighters and nurses who spend every day making a difference without any recognition or reward. In that way, The King of Staten Island plays like Davidson's tribute to his family and his hometown, a tip of the hat to the people who made him who he is, and an apology of sorts for being so difficult.

The film may be a comedy, but there's something deeply moving about its portrait of quiet working-class heroism. Davidson isn't so much overcoming his circumstances as stepping up to them, honoring the regular men and women who gave him opportunities he never appreciated. Apatow adopts an observational, conversational style, crafting a wise and warm comedy that isn't so much full of set-ups and punchlines as it is naturally flowing humor that comes out of its fully drawn characters and realistic situations. Apatow has always been a strong comedic voice, but The King of Staten Island is disarmingly strong; a perceptive and smartly written (by Apatow, Davidson, and Dave Sirus) love letter to Davidson's family that feels like a comedic revelation. It's time to start taking Pete Davidson seriously.