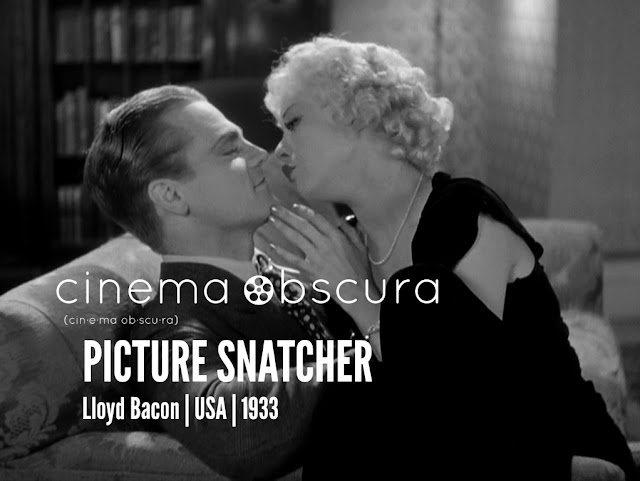 Gangster films, especially those starring James Cagney, were all the rage of pre-code Hollywood. Cagney was a star, and seeing his tough mug with its sadistically cocked eyebrow leering at his next victim has become such an iconic image that it's almost hard to imagine that any Depression-era gangsters existed that didn't look or sound like Cagney ever existed. He was THE gangster, from The Public Enemy (1931) to White Heat (1949), he managed to define an entire genre, even while proving himself equally adept at musicals like Footlight Parade (1933) and Yankee Doodle Dandy (1942). 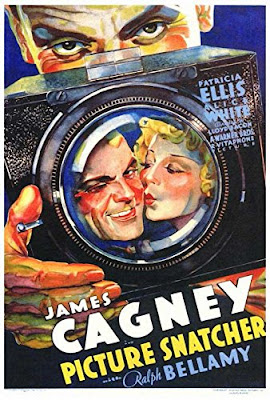 But it was gangster pictures that made Cagney a star, captivating audiences as a smooth-talking wise guy in such films as Angels with Dirty Faces (1938, which inspired the now-classic Angels with Filhty Souls as seen in Home Alone) and The Roaring Twentie (1939). Right smack in the middle of this remarkable run was Picture Snatcher (1933), a kind of anti-gangster gangster picture that cast Cagney as a reformed gangster named Danny Kean trying to go straight by taking an "on the level" job as a reporter. It turns out that you can take the boy out of the mob, but you can take the mob out of the boy, as Danny uses his unscrupulous tactics for the benefit of aa scurrilous tabloid called the Graphic News, stealing exclusive, lurid photos whenever he can. It isn't long, however, before he falls in love with the daughter of the cop who once put him away, forcing him to find a way to balance his new life with his old, dishonest ways. But when he sneaks a camera into the execution of a woman in Sing Sing, he finds that he in order to go straight, he might just have to risk it all.

Directed by Lloyd Bacon Picture Snatcher is a disarmingly complex study of a man trying to use dishonesty to become an honest man, trying desperately to shed the ways of his past but being unable to escape the only world he's ever known. He's essentially traded his gun for a camera, becoming a lawless gangster for a new, technically legal industry. One almost can't help be reminded of Billy Wilder's scathing media satire, Ace in the Hole, in the way it explores the sensational lengths one reporter is willing to go in order to get the scoop of a lifetime. It's not as nuanced as Wilder's film of course; Cagney is Cagney, all rapid-fire dialogue and bemused smirks, and at 77 minutes it flies by at an almost breakneck pace.

Still, there's something deeper going on beneath the surface of this quickie gangster drama. Few other directors knew how to utilize Cagney's unique charm as well as Bacon, who also directed him to musical glory in Footlight Parade the same year. Cagney is both rogue and hero, repugnant and good-hearted, and Picture Snatcher uses that mischievous glint and volatile energy to pitch-perfect effect, giving us a character that we're able to root for while simultaneously being appalled by their actions. That's a major factor of Cagney's specific genius; but here, perhaps even more so than in his iconic role in The Public Enemy, Cagney gives us a portrait of a man whose willingness to operate outside of society's boundaries is precisely what makes him a good man - he will go to any lengths for the people he loves.

It's a rip-roaring, crackerjack, sort-of gangster picture in the best pre-code Warner Brothers tradition that has been long overlooked in favor of Cagney's more famous roles. Yet this one deserves to be mentioned alongside some of his most iconic classics, because Danny Kean is perhaps one of his most layered and indelible characters, and stands as a reminder of why Cagney remains one of the most popular and magnetic stars in Hollywood history.